Well, the Rex Ryan issue has gone viral and now he's backing down. Sort of.

You know that Ryan attended an MMA event in South Florida Saturday night. Well, according to Dolphins fan David Hildenbrand, the Jets coach was in no mood to deal with the nation of Dolphins fans at the event.

"As he walked by, my friends said, 'Dolphins rule, Jets suck! " Hildenbrand told me in an e-mail. "He turned around and said, 'Go f--k yourself!'  There were others screaming things at him, which is why he flicked everybody off. That's when I snapped the pic." 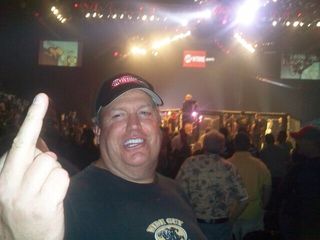 And the picture has caused enough of a stir that Ryan and the Jets are now apologizing -- but not exactly to the people he offended.

"It was stupid and inappropriate,"Ryan said in a statement released by the Jets. "I wouldn’t accept that type of behavior from one of the coaches or players and it’s unacceptable from me. I apologize to the Jets organization, the National Football League and NFL fans everywhere."

"Rex showed extremely poor judgment and his conduct was inappropriate," Tannenbaum said. "He knows he was wrong, has apologized and we have accepted his apology. Any other actions regarding this incident will be addressed internally by the organization.”

The NFL is saying it will look at the situation and make a decision whether to fine Ryan.