Another PR black eye on the horizon? Maybe

It's been a long offseason for the Dolphins, one filled with more perceived flubs and miscues than last year's four-turnover afternoon at Buffalo.

Trying to be a postive, glass-half-full person, I guess I can look past the fumbled termination of Joey Porter's contract, which had other teams and agents snickering because it was proof someone on the Dolphins simply cannot do math.

Then there was the poorly strategized manner in which the Jason Taylor situation was handled and the failure to celebrate a free agency victory by holding a press conference when a player of Karlos Dansby's stature was signed.

I can even -- eventually -- move past the Dez Bryant "is your mother a prostitute" fiasco because folks have apologized, other folks have accepted the apology, and an internal investigation into the matter is underway.

We can get past all those errors -- assuming more errors aren't on the horizon.

But at least one more possible error in judgment will be unveiled as early as Friday.

On Friday the Dolphins will conduct a three-day rookie minicamp and right there, among the rookie linebackers, A.J. Edds will be on the field wearing No. 54 -- the number worn from 1996-2007 by Zach Thomas.

It must be noted that on its face this isn't a bad thing. The Dolphins have many linebackers on the roster and every number in the 50s including 54 has been assigned. The Dolphins have also held back No. 54 for two years until now. The number is not retired.

I also recall the Dolphins in the past gave away Mark Clayton's number the year after he left via free agency. Clayton was a great player like Thomas, although not as beloved by fans.

But none of that changes the fact that the timing of this is terrible. The context of giving out that number now is bad.

You see, Zach Thomas is one of the most beloved players ever to play for the Dolphins. He lived right, played hard, and gave the Dolphins everything he had (including some brain cells following a handful of concussions).

The guy is an all-timer down here.

But only a couple of weeks ago, Thomas took the Dolphins to task for their treatment of brother-in-law Jason Taylor. He did it publicly on the radio and in print interviews and it made people notice. When you've torqued off Zach Thomas, you've probably made a mistake.

Thomas also rolled back the curtain on his feelings regarding his own dismissal from the Dolphins years ago.

He talked about how all he wanted to do the day he got waived in 2008 was say good-bye to his fans by talking to the media at the team training facility in a press conference. The Dolphins did allow Thomas to make phone calls to various media from the facility but told him if he wanted to do a press conference, he'd have to do it elsewhere. Thomas obviously feels hurt by that to this day.

And he said as much in recent weeks.

Well, the awarding of No. 54 on the heels of the former player's comments looks bad. I'm sure it is pure coincidence. I know there were several internal conversations about this very subject in recent days going all the way up the ladder to include coach Tony Sparano.

But that doesn't change the fact that it looks bad.

The timing of this makes it look like retribution.

It looks like: You criticize us, we give away your number.

Edds wore No. 49 at Iowa. The Dolphins should have given him that number for this coming rookie mini-camp. They should have let him wear it through training camp. And if, if, Edds earned a spot on the roster after training camp, they could have changed his number into the 50s. After all, a couple of the numbers currently taken such as No. 59 (J.D. Folsom) and No. 57 (Brian Johnson) might or might not be around for the start of the regular-season anyway. 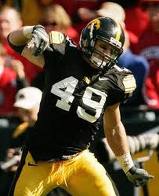 Moreover, if the Dolphins absolutely needed to give Edds No. 54, they could have turned a potential flub into a touchdown if they wanted. They could have called Thomas in, let him sign a contract for a day, and promptly allowed him to retire a Dolphin. He could have then handed that No. 54 jersey to Edds, and gotten his farewell press conference in one fell swoop.

Is there anyone who thinks that would not have been a feel-good moment?

It would have sown seeds of good will. It would have diffused an issue that might leave a bad taste in the mouth of some fans during a time they're deciding whether or not to buy tickets for 2010. (It also would have saved me from having to write this post.)

The point is the Dolphins are lately showing they do not have clear vision about what some fans, the rest of the NFL, the NFLPA, the media, or their alumni are thinking. They seem to be somewhat out of touch in that regard.

Thankfully, none of this has to do with actual football. From a football standpoint these guys are nails. They got it right from A to Z.

But when you blow stuff like the JT saga, or this little No. 54 issue, or prostitutegate, it affects the way the football team is viewed and respected. And the respect and good name of the Miami Dolphins is very, very, very, very important.

It is sad that tomorrow when the rookie camp opens, some focus that should be on how great this draft class might be will veer toward why A.J. Edds is wearing Zach Thomas's jersey. That alone shows you it's a mistake.

None of this is rocket science. But how many perceived black eyes can folks take in one offseason?

[Evening update: The link to the roster on the Dolphins website above has been altered by the team. It orginally showed Edds having been awarded No. 54, Koa Misi wearing No. 55, and John Jerry wearing No. 74. But that roster has been changed out. The Dolphins took down the roster they had on their website that showed the numbers for Edds and all the other rookies and substituted this roster instead. I would say the team felt some pressure from folks seeing Edds wearing No. 54 before it was ready to announce the move. It is also possible the team, after consideration or reading this blog, might have changed its mind and not give Edds No. 54 tomorrow after all. Maybe the Dolphins don't have a desire to create more PR problems. We'll see tomorrow when the rookie minicamp kicks off.]