Lots to get to. Let's work:

Last week an item in ProFootballTalk.com related a radio show interview NFL.com's Vic Carucci did with a Buffalo radio station, during which this very good journalist said Bill Parcells was very disappointed with Chad Henne.

That report was repeated on and by numerous outlets and although I immediatedly tweeted that the report was not accurate because Parcells is not disappointed in Henne, the perception remained out there that Miami's consultant is disappointed.

Sooo, I wanted to give that thing something of a funeral today. Sooo, I asked coach Tony Sparano if in any of his conversations with Parcells he has gotten any inkling that the Dolphins consultant is disappointed in Henne.

"No," Sparano said. "I read the little blurp there, but no, nothing."

Trust me, guys, Bill Parcells is not disappointed in Chad Henne. Now, if Henne doesn't live up to expectations, it might come to that. But at this point? Not disappointed.

He confirmed his right fibula injury is indeed a hairline fracture and said he's "week to week." 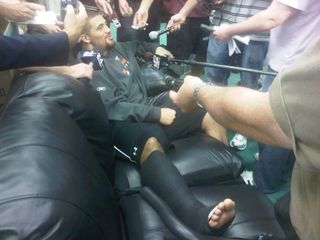 And while he had no definitive timetable for returning, Odrick didn't act like someone that is going to miss a significant amount of time. [I reported yesterday it would two weeks.] Odrick said the cast and wrap he's wearing over it is a precaution.

Odrick did share that he's broken the same right leg previously. And he has a metal plate in that leg. Interesting.

There is talk the Dolphins might solve the Odrick absence by moving Randy Starks from nose tackle back to defensive end. Starks played defensive end the past two seasons and had a stellar season there last year, collecting seven sacks.

Well, that stuff is just speculation.

I asked Starks if he would welcome such a move. "I'll play wherever the coaches ask me to play," he said. "I'll do whatever they need for the team to win."

No one has asked Starks to do such a thing. I asked Starks if he's taken any snaps at defensive end since camp started.

I asked Starks if he took any snaps at end today.

I don't see how you can ask a player to play defensive end if he hasn't worked at the position since the 2009 season. Just sayin'.

The Dolphins will more likely go with Tony McDaniel to fill in for Odrick.

This week will be something of a reunion for CB Benny Sapp and the Minnesota Vikings. He's playing against the team he was traded from to the Dolphins in preseason.

But Sapp had other things on his mind today when he went out to practice than that coming return to the Metrodome. He was thinking about that possible pick-6 interception he dropped Sunday at Buffalo.

"I thought about it until the moment I got on the field today," Sapp said. "Then I prayed for God to help me focus on this game that's coming up and leave that behind."

Sapp sought Devine intervention to help him forget but he also did the natural thing to help him succeed if he's in a similar situation in the future:

He and the rest of Miami's DBs apparently took time after practice catching passes on the jugs machine. The Dolphins dropped two pick-6 opportunities Sunday, with Jason Allen being the other DB to miss the opportunity.

"Trying to make sure it doesn't happen again," Sapp said.