« How far from best are the Dolphins in the AFC East? | Main | Mike Dee counters why stadium upgrades make sense »

And Sun Life needs a partial roof why?

In North Texas, an arctic cold front is chilling folks to the bone and has airports in the region on minute-to-minute status with flight delays and runway closings. Schools and businesses in the area are closed. Transit isn't running at 100 percent.

In Indianapolis, the feels-like temp is 13-degrees F with a 100 percent chance of precipitation today and tonight and snow expected tomorrow.

In the metro New York area, it's 35 degrees F with ice pellets dropping from the sky, depending on where you're located. There is also a light, freezing rain in the air and there's a 40 percent chance of snow this weekend.

Can someone remind me why the Dolphins and the NFL want to put a partial roof over Sun Life Stadium again?

Last year when the Super Bowl last visited South Florida, NFL commissioner Roger Goodell carried water for the Dolphins, saying he believes Sun Life Stadium needs a partial roof and some significant lighting upgrades so it and South Florida can ensure itself a continued presence in the Super Bowl rotation.

After it rained during the February 2007 Super Bowl at the facility, Goodell fielded complaints from sponsors and other NFL bigwigs upset they got wet on Super Sunday in South Florida. Nevermind that the temps locally were in the 70s.

Well, that worked for a me for a minute.

And then the NFL waived its weather requirements and awarded the game to New York, with its ugly, non-descript, open-air, $1.6 billion stadium in the swamplands of the Meadowlands. And the NFL encouraged Tampa Bay -- in the same state as Miami and with an open air stadium -- to continue bidding for future Super Bowls with no mention of that area needing a roof on its stadium.

Then the NFL awarded a Super Bowl to Indianapolis. And the idea that sponsors have to be somewhere warm and fun and sunny got tossed because Indy is none of those this time of year.

Then the NFL awarded a Super Bowl to New Orleans for 2013. And the idea the NFL requires you to have a new stadium to vie for and win a Super Bowl bid got tossed because the Lousiana Superdome opened in 1975, a decade before Joe Robbie Stadium.

So all of the NFL's arguments for Sun Life Stadium and South Florida not being adequate Super Bowl venues are thus ... to put delicately ... crap.

The truth is the NFL was interested in lighting upgrades at Sun Life and those are legit with today's new HD and LED TVs requiring more specialized lighting. But that upgrade would cost perhaps a few million dollars -- nowhere near the quarter-billion or so the Dolphins are seeking to do all of the upgrades for their stadium.

The truth is it is the Dolphins that want the partial roof. 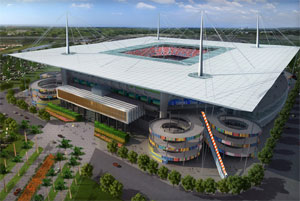 And the truth is they do no wish to pay for it.

The club has hired lobbyists, gone before local county commissions, and had numerous meetings and ear-tugging sessions with state legislators, just so the upgrades that primarily include the partial roof can be paid for by, well, someone else.

This, by the way, is a significant break from the history of the facility. Joe Robbie built the place on his own dime. Wayne Huizenga signed off on approximately $250 million worth of renovations and upgrades as late as 2008.

Now Stephen Ross, Miami's new owner, wants public funding (tax dollars) going to the next upgrade. Oh, he makes the case the dollars would be siphoned from hotel bed tax sources, meaning tourists would basically pay the freight. He also makes the case those tax dollars cannot be used on, say, police or books or fire fighters or teachers. And, of course, he makes the case that adding a roof to the stadium could, possibly, perhaps, maybe, bring another Super Bowl and the economic boon that comes with it to South Florida in the next decade.

But Ross does not mention in his argument other factoids.

The fact is other local facilities were in line for those bed tax dollars before Sun Life Stadium. Ross doesn't mention that local hotels are in competition with places abroad like Mexico or the Bahamas or Puerto Rico and thus could lose business if word gets out South Florida is a much more expensive place to stay and vacation. (Quickie aside, last year the Dolphins partnered with the Bahamas, encouraging Dolfans to travel there, even while South Florida beaches and hotels could have used more business.)

Ross doesn't mention that South Florida might get a Super Bowl in the next decade anyway. And he doesn't volunteer to cover the difference if the economy that remains in recession mode now gets worse and there's a shortfall of bed tax dollars to cover the cost of his stadium upgrades. Such a shortfall might then be the responsibility of tax funds that do go to police and other services.

All this while Ross is calling for a no-huddle attack during early season home games so the Dolphins can use the hot weather advantage they enjoy early each season -- an advantage the addition of a partial roof might dilute.

Having said all this, I have to think about where I stand on this partial roof idea. I have to consider the meaning of this idea and the manner it is being presented. I have to regard how much trust I have in the politicians and lobbyists that would be behind it. I have to consider where I believe the economy is likely to head and what effect losing one Super Bowl might or might not have on my town. I have to regard that billionair Stephen Ross wants tourists to pay for upgrades to his stadium.

And then I have to tell you, if Ross wants to drop a partial roof on his staduim, he is more than welcome to do so. It's his stadium, after all.