That’s the name. That’s the player. That’s the veteran, perhaps the only one, you must watch if you’re a Dolphins fan and have hope your team can find a game-changer quarterback whenever the NFL returns to the field.

Palmer is the one veteran quarterback in whose availability the Dolphins would almost definitely show interest.

I must, for clarity’s sake, stress there is absolutely no certainty about Palmer’s availability now. He doesn’t want to return to Cincinnati and says he’d rather retire than play for the Bengals again. The Bengals swear he’ll play for them or retire. No one knows who will blink first.

That’s not the point. The Dolphins and all quarterback-hungry teams have to consider all the possibilities this time of year. Failing to do so is simply failing to do the job.

So general manager Jeff Ireland and coach Tony Sparano, scouts and anyone else with a voice within the organization, must know which veterans could be available when the lockout ends. And Palmer is atop that list of possibilities for Miami.

The others on the list of possible available QBs – Kevin Kolb, Vince Young, Donovan McNabb, Kyle Orton, Alex Smith – also have to be considered. But none of them rate higher than Palmer. All the others have been identified by the Dolphins as a group of has-beens, or a could-bes, or a never-weres.

That long list of names is short on certainty. 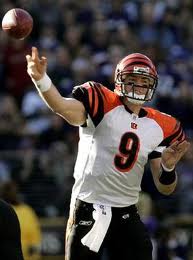 He’s unquestionably better than Chad Henne. He’s not Tom Brady, but he’s head-and-shoulders above the other quarterbacks who might become available. He’s not a Pro Bowl player but he would be the second-best quarterback in the AFC East. He’s not Peyton Manning, but if he’s put in the right situation, he could help make a mediocre team a playoff contender.

The Dolphins, 7-9 the past two seasons, are indeed mediocre. And they understand time is no longer an ally because fans and ownership want a contender in 2011.

So Palmer is the player folks in the Dolphins organization would love in a Dolphins jersey.

None of this is my opinion. It’s the opinion of folks within the Miami organization who have done the work. This comes from folks who have watched the films or crunched the numbers or done the evaluations or talked to the men who did.

Where does that put Henne? It doesn’t really affect Miami’s incumbent starting quarterback. Not yet.

Henne is the only quarterback on the Dolphins’ roster so he is the presumed starter now. And in the next couple of days when Miami owner Stephen Ross and Sparano are asked their opinion of Henne while in the Crescent City for the NFL annual meetings, they will likely say all the right things.

They will likely say Henne still has good potential and still can be the starter when the season begins. They will show equal parts confidence and hope Henne can become a franchise quarterback.

What else would you expect them to say?

The unvarnished truth is Henne is in the same spot as any other player who hasn’t proven himself. His job is perpetually at risk until he either earns the right to not be challenged or until the Dolphins find someone better.

None of this considers the draft, of course, because the youngsters fall into a totally different class. It’s possible the Dolphins feel compelled to pick a rookie quarterback and try to develop him for the future.

The Dolphins are indeed working diligently to identify the rookie quarterback that might best fit their system, their chemistry, their coaching approach. But finding that rookie doesn’t absolutely eliminate the need for a veteran.

The Dolphins understand that very few rookies break into the league as playoff quarterbacks. The odds the Dolphins would find a rookie quarterback who can play very well very quickly are microscopic. More likely the people picking and coaching that quarterback might find themselves doing so for the next football administration.

So the team has to consider veterans that can turn the club’s fortune sooner. That list of vets is not very long. And Carson Palmer is at the top of the list.