Today is about comings and goings on this blog and for the Dolphins.

It begins with the final game of the 2011 season -- a campaign punctuated by an 0-7 start that kicked the Dolphins out of the playoffs 10 weeks ago, the loss of the starting quarterback probably forever, and the firing of the head coach. Yeah, as eventful years go, 2011 is right up there for all the wrong reasons.

So today we say good-bye to a year whose best hope for delivering satisfaction is if Miami beats the New York Jets today and eliminates them from playoff contention. There will be a live blog of the game on this blog starting at kickoff so be sure to be here.

Today is also the last day the current coaching staff will be in Miami as currently constituted. Interim coach Todd Bowles will interview for the head coach job as early as Monday and that will officially kick off the search for Miami's 10th head coach, although back-channel communications with some candidates have already been made recently. (More on that later.)

My column in today's Miami Herald examines exactly how inviting the Dolphins head coaching job will be to elite candidates.

Owner Stephen Ross, a confident guy, believes the Miami job is elite. Of course he does. He's the owner and he's biased. I'm not biased. I give you the rundown on categories that make a job attractive or not to the best candidates. My opinion of how the Miami job compares to San Diego, Chicago, the Giants or other jobs that might come open?

Today will be the final day on their teams for several players on both the Dolphins and the Jets. NFL rosters turn over, people, and while the Jets are likely to have a typical turnover of about 15-20 percent of the roster this offseason, the Dolphins are bound for about a 25-35 percent turnover.

Today's about comings and goings, remember?

Jason Taylor is playing his final game today so he is departing. The Dolphins have a nice pre-game presentation set for Taylor. It includes a video and messages from various folks. The team is asking fans to be in their seats by 12:45 to witness the tribute to Taylor.

Think about this: Taylor is the last of Jimmy Johnson's draft picks still playing. Johnson hasn't coached a game since January of 2000. So the Dolphins doing their best as they are saying good-bye to JT. 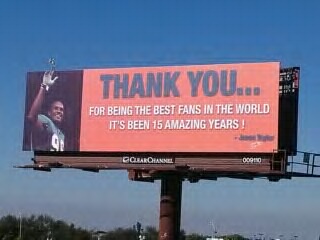 And JT is saying good-bye to the fans. He purchased and had a billboard put up around I-95 and 171st street for all Dolphins fans, including those traveling to the game, to see today. The billboard, pictured above, basically says, "Thank You ..."

Remember as all these comings and goings are happening, this blog remains. I'll be here today for the live blog. I'll be here for the reaction afterward. I'll give you all the latest information possible and will continue to try to do it as quickly as possible.

So while everyone else is coming and going, please stay here. I'll be here, too.