There's a grassroots movement in town to bring Peyton Manning to Miami. No, I'm not talking about Dolphins owner Stephen Ross's intentions of having his team chase Manning.

I'm talking about the folks that put up a billboard close to the intersection of Interstate 95 and Interstate 595 near the team's Davie, Florida practice facility. 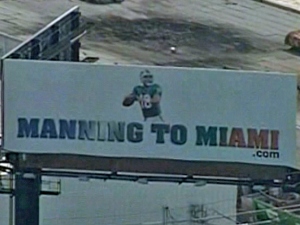 The movement's website is manningtomiami.com and in trying to explain its mission statement it asks rhetorically, "How many wins is Manning worth? When's the last time we the fans have had an "impact" quarterback? What about the most cerebral quarterback of all time?

"Get behind this movement and let your vote be your voice and make a difference!"

The site also has sponsors so I suppose the mission statement is also to make money. And I applaud the entrepenurial spirit of the work. I also respect that folks with an opinion and a passion get off their duff and turn an idea into a tangible work.

It doesn't change my mind about the wisdom of Manning. (I'm not for it).I doubt it moves the Dolphins one way or another because they are not sending out ballots to fans to listen to their voice. I also doubt it will move Manning one way or another if he eventually reaches a moment where he has to decide where to play other than Indianapolis.

Still, good job by the website and billboard folks. I wonder if they'll debate the issue as we do here -- because it is not a slam dunk. I wonder if they will answer the serious questions about signing a 35-year-old (36 in March) quarterback with a great career to his credit, but also with a serious nerve damage history.

By the way, this is your chance to show your creativity. If you wanted to put up a billboard near the Dolphins facility, what would it read?