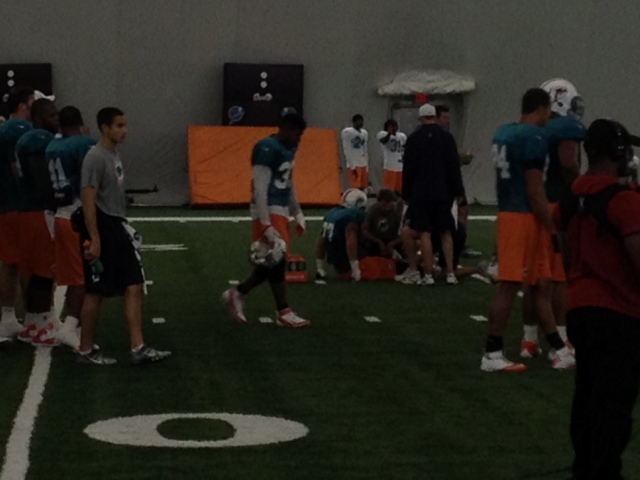 Long was protecting on a quick pass when he suddenly fell to the ground in a heap of other players. The others got up. Long stayed on the turf inside the Dolphins practice bubble for at least two minutes. Two, long, painfully uncertain minutes.

After trainers and coach Joe Philbin came over to assess the problem, Long eventually was helped to his feet and walked to a cart parked along the sideline. Trainers unfastened his right knee brace, pulled it down to his ankle and began to work the area between the knee and ankle even as Long shook his head in disgust.

Long, it must be said, was seen pointing to his knee initially and later was rubbing it. After spending a couple of minutes on the cart, Long and head athletic trainer Kevin O'Neill left the bubble to go into the facility. Long walked out under his own power.

I will not speculate if this thing is serious or not. The Dolphins themselves don't even know at this moment.

It may be that we don't know how serious this is for a while as Philbin has a policy in which he refuses to discuss injuries to any degree.

Long, entering his fifth NFL season, has been to the Pro Bowl four times. He played most of the past two years with injuries to his knees and shoulder. He said earlier this training camp that this was the healthiest he felt since his rookie year.