Does the family side of Ireland change your perspective?

I saw a side of Jeff Ireland over the weekend that I wasn't familiar with. I saw him put his youngest girl Annie on his shoulders like dads put their kids on their shoulders to see parades. I saw his pride in his only boy Riley. I listened to Rachel Ireland, the Dolphins general manager's wife, talk of how they met and how Ireland cared for her when she was in an auto accident soon after they met.

He asked her to marry him three months after they met. As I write in my column today, she was in a wheelchair when he proposed.

My column is not about the relationship Ireland and his wife share, although it does touch on it. That relationship seems strong from the outside. It has to be.

Because my column is about the Ireland twins and the struggles and fight and fallout that caused by the autism that attacked them when they were two years old. 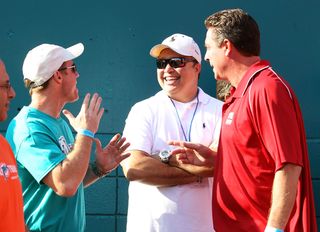 I spent time with the Irelands (and Dan Marino as you can see in the photo) during this weekend's Dan Marino Foundation Walkabout for Autism at Sun Life Stadium. Ireland told me he's on the road for the Dolphins 150 to 175 days per year -- scouting, at bowls, at league meetings, at the combine, at player workouts. I've dealt with that side of Jeff Ireland. The General Manager side.

I hadn't dealt too often with the guy I saw over the weekend. The father. The husband. The guy who got a call when he was at the East-West Shrine game from his wife telling him to come home.

Three of the children had Influenza A. Annie had a fever of 105 and it wasn't coming down. Two others were throwing up. The nanny had gone home for the evening and Rachel couldn't get a hold of anyone to watch the other kids.

It was time to head to the hospital so Rachel called Ireland, who was in Tampa for the game.

"I was taking them all the kids with me so I said by the time I get them all packed up and out the door, you need to be driving across Alligator Alley and come get the other kids so they don’t have to spend the night in the hospital with me," Rachel said. "And he came home.”

What else is a father to do, right?

“That doesn’t happen very often so when she makes that call, it’s a big deal," Ireland told me. "She can balance a lot. We sit there an argue for a second and then I realize it’s serious and I come."

We don't think of football players as people. They are guys on a TV screen that are chiseled and strong and fast. We don't often see their human side behind that helmet.

We don't think of coaches or general managers as people. They're the guys pacing the sideline or making trades from behind a curtain. And all we seem to care is if they get results. We don't much care if their children are sick, or their marriage is strong, or their twins twins have autism.

Look, many of you are very hard on Ireland. Your reasons for that, I assume, have to do with his work in bringing a winner to the Dolphins. But some of the criticism  is personal and cruel.

So now that you've gotten to know the Ireland family better are you as likely or less likely to take shots at the Miami GM?

Remember, professional accountability and criticism is inbounds. But can you agree with me, personal cracks are out of bounds?