Wallace deals with groin while Dolphins get work

Mike Wallace confirmed today he is battling a groin injury and that's the reason he led a handful of players being held out of practice today. Wallace also said he would like to play in Sunday's Hall of Fame game but obviously that's a decision for the coaching staff.

"It feels pretty good," Wallace said. "I feel like it's getting there."

Brian Hartline also sat out most of the drills with a calf strain. I'm certain if there had been a game today or a regular season game this weekend, both Hartline and Wallace would be playing. So there's that. 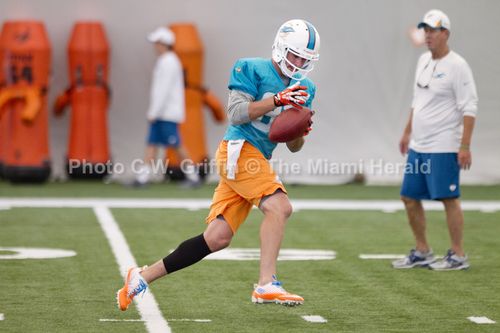 Randy Starks sat out practice and had a compression sleeve on his right leg. That gave Jared Odrick, who is competing with Starks for a starting DT job, all of the first-team work at the position until he simply stopped working midway through practice. It seems Odrick had some sort of minor health issue although it's not clear what.

On the bright side of the injury department, today was the first day rookie cornerbackJamar Taylor got in both individual and team drills after missing practically two weeks with issues related to his offseason hernia surgery.

"I'm definitely happy to be back on the field," Taylor said. "Being hurt shows your character and the person you are so when you come out here you have to let everything go and play. I'm definitely not full strength, but we got great trainers that are going to keep working on me so I'm going to get there."

Coach Joe Philbin said he'll finalize play-time for Sunday's game on Saturday but it's obvious he already knows how he's going to proceed. Philbin announced that the installation phase of training camp is now over with the end of today's practice. He estimated that 95 percent of the playbook is in for the offense, defense and special teams.

"We've covered every situation that we possibly can so our guys should be ready to play a good football game Sunday night in Canton," Philbin said.

Today's action was actually fun to watch. There were plays being made on both sides of the ball, which is much more interesting than when one unit dominates.

On defense, it was an impressive day for rookie Will Davis, DE Olivier Vernon (again), and CB Richard Marshall. On offense, Matt Moore seemed to have a good day as did TE Kyle Miller.

After practice Philbin told the team "some guys had exceptional practices, some guys didn't.  Davis, Philbin noted, got his hand on six to eight passes for passes defensed so "I thought he had a good practice. I'm sure there are technique things he has to work on, but I was pleased with him today."

That's great news for Davis who started quite slowly but had an interception in the end zone during the scrimmage Monday and believes there's a reason he's starting to shine.

"When the game slows down for you, you are able to make more plays," he said. "That's happening for me now."

The game has seemingly slowed down for Olivier Vernon in his second season -- at least when he is matched opposite left tackle Jonathan Martin. Vernon has owned Martin since the opening of camp and today was no different.

Vernon had three sacks against Martin during team periods. It's great news for the defensive end. For the Dolphins starting left tackle, it is looking problematic at this point.

"I think it's been going pretty well," Martin said. "You have some good days and some bad days out there. My goal is to try to be consistent against a talented D-line ... It's been challenging but I like it. I like going against the best."

Martin said his biggest focus is improving his hand placement and balance. On the bright side for Martin, a day after rookie Dion Jordan beat him twice for sacks, Martin got the better of the rookie Thursday. Jordan did not collect a sack against Martin.

One thing of note about Jordan. I saw him rush the passer out of a three-point stance, a two-point stance (standing up) and drop into coverage today. 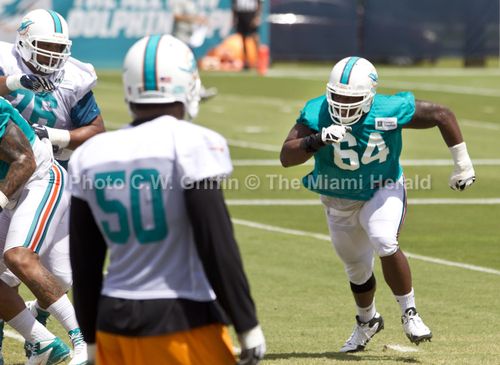 The offensive line did not do much mixing and matching today. Martin was at LT, Richie Incognito was at LG, Mike Pouncey was at C, Josh Samuda was at RG and Tyson Clabo was a RT. There also was no moving of Incognito, Pouncey and Samuda around to other positions.

While the LT spot looks like a weak link so far, I'd say the RT spot will be solid based on what we've seen in practice so far.

Understand that Tyson Clabo was let go by the Falcons in the offseason because of cap and other considerations. Understand that he faces Cameron Wake every down. And yet, Clabo has not been beaten nearly as often as Martin. Indeed, he's scored pretty much a stalemate with Wake on most day. And Wake is a premier pass rusher in the NFL the past couple of years.

Miller, one of five tight ends in camp, had a 30 yard touchdown grab off the arm of Pat Devlin for the day's longest scoring play. Miller also had a couple of other catches. Also getting TDs off short throws were Julius Pruitt (who also dropped a pass), Kenny Staford and Chad Bumphis.

Charles Clay, who had a TD in Monday's scrimmage, was almost invisible today except for a dropped pass.