« The practice report from the practice that never was | Main | Soliai, Patterson out vs. Falcons PLUS more info »

Dolphins D by any other name still excellent

They call themselves "The Brotherhood."

The Dolphins defense has given itself a nickname, handle, sobriquet, whatever you want to call it. Cameron Wake says it's the brainchild of Paul Soliai, Randy Starks, himself and others, and the players have had shirts made to celebrate the new identity.

Not everyone gets a shirt by the way.

"This is one shirt you have to earn," Wake says. "We don't give it out to everybody."

I canvassed the Dolphins locker room and found many of the defenders had a shirt such as the one Wake is modeling in the photo. 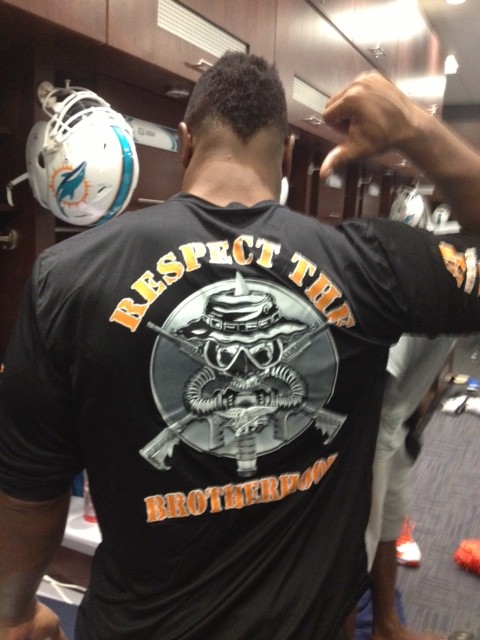 "It means you're recognized for doing something good," linebacker Dannell Ellerbe said. "It's good when you get the respect from your teammates and coaches."

That's what the shirt may mean. The "Brotherhood' means more, Wake says.

"The brotherhood is strong. It's like a fraternity. It's a family," Wake says. "You have a job to do and 10 other guys are expecting you to do your job so they can do their job. If you don't do your job, you're letting everybody down. You're letting your family down. And if you have too many letdowns, somebody else will be doing your job. You have to respect the brotherhood.

so far this season, the Dolphins defense, the brotherhood, is doing a good job where it counts most -- the scoreboard. The Dolphins are tied with the Jets and Oakland for fewest points allowed per game. They are fourth inn third down efficiency. They are sixth in interceptions percentage. They are ninth in sacks per pass.

But it is the points per game that suggests good things ahead.

"That's the No. 1 stat on a defense," Wake says. "You want to make sure you take care of that. You want to keep it going and it's the culmination of all the other ones -- don't let them run the ball, get off the field on third down, turnovers. It all trickles down to defensive points allowed."

If the Dolphins continue to play defense at their current level (yes, everyone knows two games is a small sample size) then Ellerbe says his new teammates might start to gain a reputation similar to the one his old mates on the Baltimore defense earned.

"It's something that comes with time," he said. "We're putting in the work right now. So a couple of years down the road, it'll be something that's talked about: The Miami defense. We want to start our own thing down here."