« When the starting running back is not the starter | Main | McKinnie: The timing, 'Big Mac,' Philbin reaction »

The plan for LT Bryant McKinnie

My guess is the Dolphins will be coy about their plans for Bryant McKinnie this week against New England.

The only question that remains is whether McKinnie can get up to speed fast enough to be in the lineup this week. The Dolphins hope he can. He is, after all, a 12-year veteran. He has not been sitting on his couch so he is up to as good a football shape as he can be in for his history with weight issues. 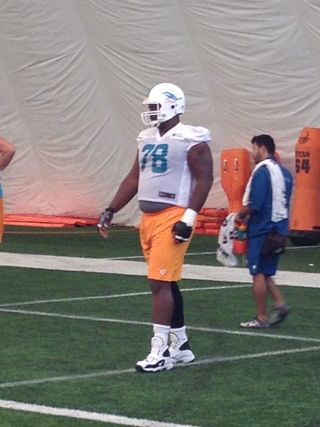 (McKinnie is clearly overweight. The Dolphins list him at 352 pounds. He looks to be more in the 370 range. His sizeable belly bulges out of his practice jersey).

So if McKinnie can learn the playbook -- or enough of it -- to meet the coaching staff's expectations, he'll be playing on Sunday. If not, well then the following week for sure.

The intriguing dynamic the McKinnie addition brings to practice is what to do with Martin. He obviously needs to get re-acclimated with right tackle.

So do the Dolphins split his snaps between left and right to hedge their bets? Or do they commit to giving him right tackle snaps exclusively?

My guess on that is Martin gets the right tackle snaps. Although he stayed at left tackle during the short walk-thru team portion that was open to the media today (nice misdirection, Dolphins), he is expected to take most of the work at right tackle with the starters.