Word of the day for the Dolphins: Regression.

BOSTON -- They led 17-3. They rushed for 156 yards and averaged 5-yards a carry. Tom Brady was less than mediocre, throwing for only 116 yards with one touchdown and one interception with a visibly swollen throwin hand. New England right tackle Sebastian Vollmer broke his leg and left the game, joining Vince Wilfork and Jerod Mayo, who are done for the season, and cornerback Aqib Talib, who didn't play.

And given all these advantages and perfect scenarios, the Dolphins still lost?

And that leads me to the word for today: Regression.

As I write in my column in today's Miami Herald, the Dolphins collapsed and they are in full blown regression.

The Dolphins have regressed from the team they were last year at this time when they were getting better results with less talent.

The Dolphins have regressed from September when they were 3-0.

The Dolphins have regressed to the point they're arguably the worst team in the AFC East. That's right, Miami is in third place with a 3-4 record behind the Patriots and the Jets and just ahead of the Bills. But Miami has a division worst 0-2 record and they already lost to the last-place Bills.

How is any of that better than it was last year?

And amid all of this the Dolphins are borderline delusional.

"No, I don't feel like the season is starting to slip away because we have a great team," nickel back Jimmy Wilson said.

Wilson went on to say the Dolphins need to win the next four games to make up for the last four consecutive losses. Well, the Dolphins are 2 1/2 games out of first place already and they're not getting stronger but they better start winning very soon if they want to salvage this season.

But how to do that when they're getting worse?

Ryan Tannehill is playing worse now than he played in September.

The talent level is getting worse with the loss of wide receiver Brandon Gibson for the season.

And the play-calling? It's getting worse. Consider that it's bad when offensive coordinator Mike Sherman abandons the running game when it isn't blowing the opponent away. On Sunday, he abandoned it when it was working! In a close game!

And now the players are noticing.

"It seemed like we were running the ball real well, we were effective," guard Richie Incognito said. "It was third and manageable; we were picking up big chunks on the ground. I think we got away from that in the second half. That is kind of where we kind of sputtered."

Tell me something ... why aren't Miami's rookies playing?

Why is Nolan Carroll playing -- and giving up a TD pass as soon as he enters the game -- but second-round pick Jamar Taylor and third-round pick Willie Davis are inactive? Well, either those kids are not very good (which is on the personnel department) or they are not being developed (which is on the coaching staff).

Why is first round pick Dion Jordan a part-time player but less talented, less upside Olivier Vernon and Derrick Shelby are playing more? I know Jordan is talented. It seems every time he's on the field, something good happens. But he's not really on the field all that much. How are coaches arriving at those decisions to play a better player less? 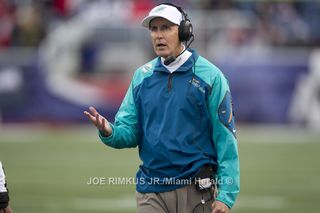 Why has Mike Wallace looked so ineffective? He came to the Dolphins as an accomplished deep threat. He came here without major issues about his hands. Now that he's with the Dolphins he cannot get deep and cannot hold on to the football? Sorry, I don't buy it's all on Wallace. The Dolphins blamed Brandon Marshall when he didn't produce as much in Miami as in Denver. Then Marshall went to Chicago and produced at a very high level again.

After a while it's not the player we should be looking at. It's the people charged with developing those players and the system those players are put in.

So where do we go from here?

Well, general manager Jeff Ireland needs to find a wide receiver because the Dolphins only have three on the roster and one on the practice squad.

The trade deadline is Tuesday. Ireland addressed the desperate need for an offensive tackle by trading for Bryant McKinnie. And although the Dolphins gave up six sacks Sunday -- all in the second half -- four of those came when the Patriots figured out Sherman had no intention of running the football. 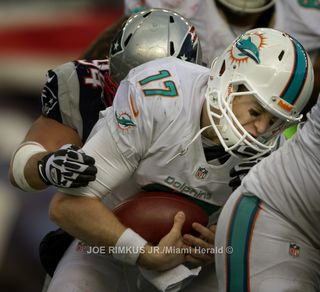 The AFC East is still wide open, because the Patriots seem vulnerable despite their 6-2 record. The team has multiple injured players, including Brady who nonethless denied his swollen throwing hand was swollen.

The defense that was supposed to make more game-defining plays doesn't.

And Tannehill fumbles or throws the interceptions or shows little pocket or situational awareness -- particularly lately.

There's a word for all of that: Regression.