« Quick practice report: Day 2 | Main | Wallace eager, willing to do more: And may have to »

Photos from Day 2 of Dolphins camp 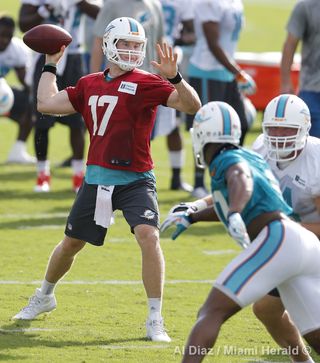 Dolphins quarterback Ryan Tannehill was better Saturday than his first day Friday. But there were still moments of uncertainty. He made one terrible decision, throwing a deep pass into double coverage. The ball could have been picked but was instead swatted down. He had another late decision to Mike Wallace that was intercepted. Tannehill did deliver a fine throw to complete a long pass to Damian Williams. 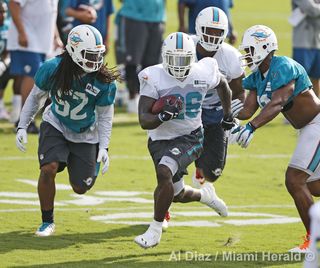 With Knowshon Moreno on the physically unable to perform list, Lamar Miller continues to take first-team snaps at running back. Here's an interesting question that will face the Dolphins once Moreno is healthy: Do you start Moreno, knowing that he's also your best blocker on third down passing situations? That would thus put Moreno in the game all three downs. Or do you let Miller carry the mail the early downs and make Moreno, the best blocking RB on the team, the third-down back? The Dolphins are urging more communication and being better teammates this year. So far that has kept the rookies free of the zany (and often embarrassing) haircuts that veterans forced on rookies in the past. Some rookies have been forced to carry the pads off the field for vets. That seems harmless. But in the wake of last year's harassment scandal, so far the rookies so far haven't had to treat for expensive dinners or play the role of fools.