« Phillip Wheeler set to play Sunday after all | Main | Keys to the game: Miami Dolphins at Buffalo »

Miami Dolphins rally to side of cancer-stricken fan

"It's a new step for us, but a very hard step for us as well," said Amy Chandler-Smith, Michael's wife. "There's a realization one comes to when you sign papers to go to hospice. It's a huge, huge thing. Because you're admitting defeat. 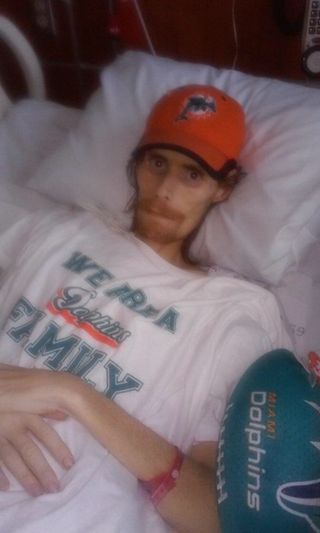 "He's a fighter and he's always been a fighter. He's always fought for his family. He's always taken care of his family, and now it's admitting you have to give up. There's nothing else you can do.

"There's no more treatment for him. He can't get any more chemo. He's gotten too much antibiotics and his kidneys and liver are having issues. If he gets any more they'll start making him more sick."

Michael is gaunt. His face is drawn and colorless. And the picture of him in that bed at Hospice by the Sea at Memorial Hospital South in Hollywood speaks to his prognosis.

"It's terminal," Amy said. "He's kind of the light's are on but no one is home right now. He'll have moments when he'll be up and be fine and talking and be okay and there's other times when he's lost and in la-la land and he kind of looks through you and not at you.

"The cancer has taken a toll."

The cancer is obviously winning. But despite this the Dolphins learned of their fan's dire situation and have rallied to his bedside.

They cannot save him. There are some things not even an NFL team can do. But they can acknowledge him. They can encourage him.

And they're doing just that.

It started oddly enough. On Sunday, when the Dolphins opened the regular season, the Smiths gathered by Michael's bed. Amy dressed her husband in his Dolphins gear.

"Oh my God, he is just the biggest fan." she said, "And this was just my husband putting on his Dolphins gear. I got him ready for the game. I was, 'Mike, it's the Dolphins, it's the season,' So we got ready."

The shirt Michael wore reads, "We are a Dolphins family."

Sunday was a good day. The Dolphins won. And much more importantly but not to be dismissed as assumed, Michael survived the day.

That night, laying in bed, Amy recounted the day and what the football team meant to her husband. Right then she decided it really would be great to have her husband perhaps meet a Dolphin before he passes.

"The next day there were Dolphins calling me," Amy said. "I never in my wildest dreams thought I would get a Dolphin here, let alone the next day, let alone a parade of past and present Dolphins here. We've had so many it's amazing." 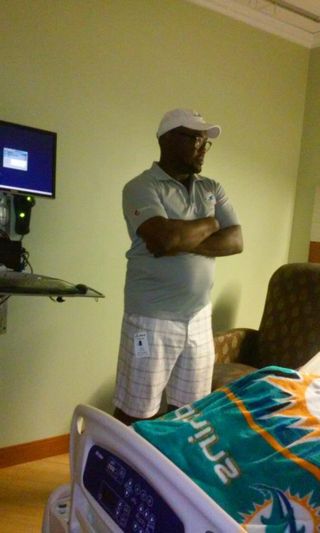 Zach Thomas called because he was going out of town. He promised to get back in touch today when he returns.

Derrick Rodgers called. Rogers then had Tim Bowens call. Lousaka Polite is visiting today. He asked if he could bring anything like "snacks, books, anything."

"It's an amazing outpouring," Amy said. "I'm so blown away. They have been truly beyond amazing."

Those visits and precious moments have been priceless for Michael and the family. But there are still other issues.

Michael had to stop working shortly after being diagnosed in November 2011. He tried to go back but couldn't do the job. The family lived on disability income and with no insurance had to rely on Medicaid from the state.

Then the medical bills began to pour in. The radiation bills alone were roughly $60,000, Amy said. And it does not stop there. There's ambulance bills, hospital stays, medicine.

The family -- including the five children ranging in ages from 20 to seven years old -- had to downsize.

The Dolphins have not helped the Smiths financially. Nor has anyone asked them to do so.

"Asking for money is odd to me," Amy said. 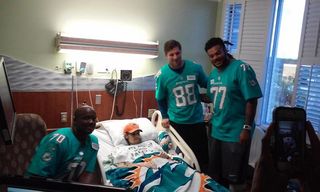 But a company named HealthDonor has come along side the Smiths to try to help raise money. The company operates a crowd-funding platform to help people raise money for individuals with unexpected medical expenses in their time of greatest need.

One hundred percent of the donated money goes the beneficiary. If you wish to help the Smiths go to this link and kindly do so. You'd be helping someone in the Dolphins family. I checked the site out.

At the time of this writing $360 had been pledged to help the Smiths.

[Update at 10 p.m.: I'm told that Michael Smith died Friday afternoon surrounded by his family. May he rest in peace.]