Uncertainty within the Dolphins WR room

The Miami Dolphins wide receiver corps will be an interesting place for offseason decisions soon.

The team could keep or cut Brian Hartline, Mike Wallace or Brandon Gibson. Jarvis Landry and Rishard Matthews are youngsters who are still on their rookie contracts so there's no financial decision to make on them.

And in his first interview since the 2014 season ended, Brian Hartline tells me he's feeling the uncertainty of the situation. Hartline is asking the Dolphins to make a relatively quick decision on his status and communicate that within the next couple of weeks.

To me, the decisions that need to be made are quite difficult.

Let's look at the situation:

Wallace is scheduled to cost the Dolphins $12.1 million against the cap in 2015. No one, and I do mean no one is going to take that contract in trade so get that out of your mind now. He is also not going to accept a pay cut, per a source.

So the Dolphins' choice is to decide to keep Wallace or cut him.

If the Dolphins cut Wallace post June 1 (either in fact or through a post-June 1 designation, of which they get two) they can save $6.9 million of cap space but would carry $5.2 million of dead money. If they cut him prior to June 1 the cap savings is only $2.5 million and the team would carry a whopping $9.6 million in dead money on the player.

Wallace, by the way, is going to get $3 million in actual dollars from the Dolphins even if he is cut because that money is guaranteed.

The issue gets tricky with Wallace because making a decision on him is not soley a cap issue. As I and the NFL Network reported weeks ago, Wallace told his position coach and later repeated to his head coach that if he wasn't getting the football thrown to him, there was no need for him to play just prior to halftime of the season-finale against the New York Jets. This according to multiple team sources. Wallace has denied this.

But not only did he do it, I am told he did it previously, including in the 41-13 loss to the New England Patriots. Indeed, Wallace voiced this complaint to position coach Phil McGeoghan previously but the season-finale was the first time I know quarterback Ryan Tannehill was upset with Wallace about this matter (forcing him to complain to McGeoghan as pictured) and the first time the issue went all the way up to head coach Joe Philbin (as pictured below). 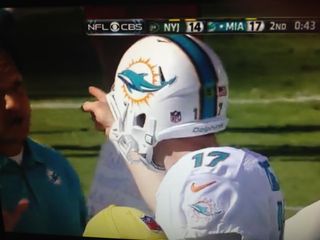 So the issue now is whether Philbin can keep Wallace on the team and keep the respect of the locker room at the same time -- knowing that dozens of players in the locker room, including the starting quarterback, are aware of what happened and are now looking to see whether Wallace gets away with it.

It is going to be an interesting decision.

Hartline is scheduled to cost the Dolphins $7.35 million in cap space. I don't believe any team is going to take that contract, either, so trading him is unlikely.

The Dolphins can try to renegotiate and by that I mean try to negotiate a pay cut. But Hartline obviously doesn't have to accept.

If the Dolphins cut Hartline post June 1 (either in fact or through a post-June 1 designation, of which they get two) they can save $5.95 million of cap space but would carry $1.4 million of dead money in 2015. If they cut him prior to June 1 the cap savings is $3.1 million and the team would carry $4.2 million in dead money on the player.

Gibson is in the final year of his contract. He is scheduled to cost $4.26 million against the cap. The Dolphins could try to trade Gibson but who is going to rent him for one year at such a high price? They could also try to renegotiate a pay-cut but he would decline, according to a source.

So to save money here, cutting him is the only real option. If the Dolphins cut Gibson they would save $3.26 million of cap space regardless of whether they do it before or after June 1. The team would nonetheless carry $1 million in dead money.

Those are the choices. Those are the decisions the Dolphins must make about their very high priced wide receiver room.

Me? I cut Gibson, and save $3.26 million. I would also ask Hartline to take a reasonable pay cut -- it cannot be too large because otherwise he'll reject it and the team will have to cut him. And, trust me, he'll be way more productive in New England or Indianapolis than he was with the Dolphins because he's a good player. 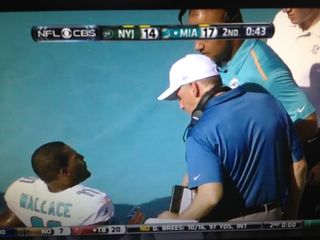 But, understand, I'm not the Dolphins. I'm giving this opinion in a vacuum based on not having to live with Mike Wallace. His attitude behind the scenes is definitely an issue. He puts a good face on everything in front of reporters and the TV cameras but the coaches and the players know he's something of a diva. He's also hard working and potentially dynamic. But he's a diva nonetheless.

There are no easy answers here, folks. Actually, it feels like there are no right answers.

So that is why I would take the road of least resistance.