« Patriot: Wallace issue a sign of mental weakness | Main | Where Miami Dolphins stand: You're going to HATE this »

The Miami Dolphins this weekend or early next week will roll out a new pricing plan to their season ticket members that club Senior Vice President - Chief Marketing Officer Jeremy Walls says will reflect the upgrades to Sun Life Stadium without necessarily digging much deeper into the pocket of the club's fans.

Yes, that still will mean a ticket increase in some sections of the stadium. The most expensive seat in the house, which will come with a litany of perks, is going to exceed $1,500.

But Walls, who declined to outline the entire ticket structure until season ticket holders see them, said Wednesday that prices for 56 percent of seats in the stadium are staying flat. He said 14 percent of seats will be going down in price. That means more than 45,000 seats will either stay flat or drop in price.

The median Dolphins season ticket was No. 19 compared to the cost of season tickets for other NFL teams last year. Walls said that will rise but not substantially.

"We will still be somewhere in the middle to the bottom tier after the price adjustments," Walls said. "The overall view of this, as I look at a construction crane outside my window here, is the bowl as we knew it is completely different. We've already ripped out all the seats. We're in the process of knocking down the concrete along the sideline. So the seating bowl is totally different. And from there we've created all new seats and seating experiences for fans across all budgets."

Sun Life Stadium will go from approximately 75,000 seats to 65,000 for 2015 as the stadium is modernized. Despite the lower capacity and a $400 million price tag on the modernization, the club is not going to require fans purchase a personal seat license (PSL) as other teams opening new or modernized stadiums have done.

The modernization will make Sun Life different. And so season ticket customers will get an opportunity to adjust their seating arrangements.

"Sometimes you'll see a team select the seats for the ticket members," Walls said. "We chose to say, 'No our members will want to pick their own.' So we're going to let them do that. It will all be based on tenure so the longer you've been a member of the Dolphins, the sooner you'll be able to pick your new location in the stadium. And they'll be able to do that several different ways."

A preview center will be finished at Sun Life within a week or so. That will provide a virtual view of the stadium as it will look in both 2015 and '16 when the modernization is completed and topped off with a canopy over the stadium. Visitors will also be able to sit in actual seats. There will also be opportunities to picks seats online or over the phone with the team's service representatives as well.

The biggest price change will come to the seats that were previously at the 30 yard lines on the south side (no sun side) of the stadium.

"For the handful of people whose seats were changed, we definitely took that into consideration," Walls said. "We have seating options for them at the same prices they're paying now a section over from where they're at or across the way, if they want to sit on the north side, and pay the same price. We wanted to have good options for everyone. We did factor that in when we set our prices." 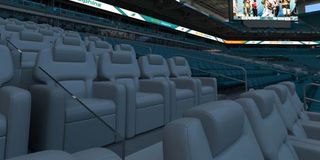 There will be 16 "Living Room Boxes" on each south side 30-yard line. Each box has four seats with televisions and access to a club -- called the '72 Club -- that will offer all-inclusive food and beverages, including liquor. Folks who don't want to walk to the '72 Club have the option of having wait service staff attend to their needs.

Living Room Box members will also get private sedan service to and from the game.

"It's a high-end, exclusive experience," Walls said. "We did not have that in our current stadium so we felt in addition to building experiences for fans that want to come to the game at a lower price point, we also want to offer a high-end premium experience."

Not everyone can opt for those seats. There are other choices.

There will be an basketball arena sized number of seats under $50. The Dolphins will also have seats that are $34 and others that are $42. The lowest priced seats will be in the upper bowl. Most of those will stay flat in price.

The seats that coming down in price?

The former end zone club seats will be among those because they no longer exist. That means the end zone seats are coming down from $160 to $85.

"If you're a club seat holder now, you're in between the sidelines," Walls said. "If you want a nice seat in the 200 level in the end zone, you're paying $85 versus $160. The only difference is you don't access to that club anymore."

Walls said the Dolphins policy is to communicate and perhaps "over communicate" with season ticket holders. So club representatives have been talking to fans for several weeks about the new stadium and the new ticket plans.

"We've been spending the last three weeks," Walls said. "We've been having two-way conversations with almost half of our season ticket member base. Explaining this is a whole new stadium. It's a complete reset. But, 'Hey, you get to come down and pick based on your tenure.'

And what is the reaction so far? Are people accepting the changes?

Walls says he expects the retention rate to be better than 80 percent. He also said The Dolphins have 3,500 new deposits for season ticket memberships which is double what the team had at this time in 2014.

"Early indications show that," he said. "I think people are understanding the scarcity. We had seven games paid over 70,000 last year and we're going to have 65,000 seats next year. We took out the 10,000 worst seats. I think people are getting excited about the new stadium and that it is actually happening."

But what about the team? The team was 8-8 last year. It was 8-8 the year before. Why should fans pay more for that?

"That's a great question," Walls said. "And I would say 70 percent of our seats are staying flat or going down. Only a small portion is going up."