The Miami Dolphins are making room for the signing of defensive tackle Ndamukong Suh today. He has arrived in South Florida, per a team source.

So one defensive tackle is coming and another is going because Randy Starks was released by the team this morning.

The move saves the Dolphins $5 million in salary cap space. It also creates a big hole on the roster.

The Dolphins are now without two of the top three defensive tackles from last year's team -- a fallout from being the No. 24 run defense in the NFL -- as Jared O'drick is gone to the Jacksonville Jaguars.

But Suh and fallout from his whopping $114 million contract will continue to be felt, as I write in my column today.

Later today the Dolphins are likely also going to release linebacker Dannell Ellerbe if they cannot trade him and his terrible contract. 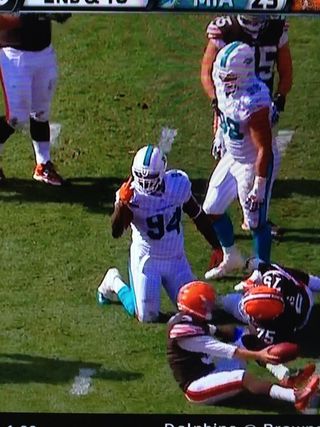 Starks, 30, turned in a typical year (for him) last year. He had 26 tackles in 14 starts. He had 4.5 sacks and recovered a fumble. He played for the Dolphins since 2008 when he came from Tennessee as an unrestricted free agent.

He's on the market once again.

By the way, I appreciate that Starks was his own man and something of a bully. When the coaching staff benched him before the first game in 2013 because he had stayed away from all the team's offseason activities and workouts while tagged as the franchise player, Starks revolted.

In the first game against Cleveland, coming in as a substitute, he picked up a sack immediately. And then turned to the sideline and shot coaches a middle-finger salute.