Richie Incognito saying all the right things in Buffalo

Monday is the first day NFL teams with new head coaches can begin their offseason programs.

And the Buffalo Bills, sporting new head coach Rex Ryan, are underway in Western New York. And as part of that program the team is allowing media to meet and greet and interview players and Ryan. And one of those new players is left guard Richie Incognito, the one-time Miami Dolphins Pro Bowl offensive lineman.

And Incognito is saying all the right things at his media availability.

"At the end of the day, humbling is the best way to describe the past year for me," said Incognito, who missed the past season-and-a-half after being suspended by the Dolphins for half of the 2013 season and being unsigned all of 2014 ostensibly for his role in the harassment scandal that involved fellow lineman Jonathan Martin. 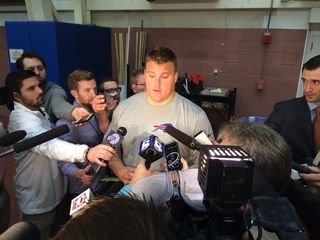 "I had a great experience meeting with [Buffalo owners Kim and Terry] Pegula and I have great respect for Rex and [offensive coordinator] Greg Roman," Incognito said via the Bills. "I'm really thankful."

So what are Incognito's goals with the Bills this year?

"I want to come in and help the guys around me play better,' he said, "and earn a starting spot."

Somehow Incognito starting at left guard for Buffalo and playing against the Dolphins and Ndamukong Suh should be interesting.