« Dolphins loss to the Giants was a coach killer | Main | Jimmy Wilson a fallback rental at safety? »

I shared with you this morning that the Monday night loss to the New York Giants hurt Dan Campbell's chances of getting the fulltime head coach job. I know he recognizes this.

But he talked to the media this afternoon and explained that while losing "pisses him off" he recognizes he did it to himself. His team did it to itself. It is no one's doing except those who work for the Miami Dolphins.

And so while Campbell is smart and knows he faces long, very long, odds of landing the Miami job after this season mercifully ends, he is such a competitor he is going to grind out the next three weeks as if it is his job to lose.

I know this: I'd be surprised if we see Jamar Taylor on the field the next couple of weeks because coaches are, as one source told me, "fed up" with him. He gave up an 84-yard touchdown Monday night and has a recent history of giving up a lot of completions. The only thing that might force the Dolphins to play Taylor is an injury, such as a concussion to Bobby McCain which put Taylor in the game.

It is Tony Lippett time, folks.

I know Campbell might order a tweak on how the Dolphins handle opposing elite wide receivers because the coach now admits cornerback Brent Grimes is not playing at the level he has in the past or at the level the team expected him to play.

And I know Campbell is a little weirded out by the fact he kept Lamar Miller on the sideline for parts of the second half, partly because the situation dictated and Miller had an ankle injury ... but after the game Miller said he was fine, didn't have an injury, and didn't know why he was held out. 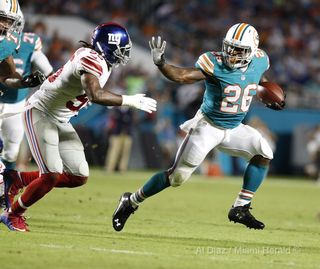 (On what explains the number of 100-yard receivers: poor tackling, poor coverage, missed assignments)  -- “I would say the top two, the first two that you said more than anything. We have had a few issues tackling. We haven't done a great job on the back end.”

(On if it seems that teams are going at CB Brent Grimes more this season than they had last year or the year before)  --  “Yeah, but let's put it this way, to me, they're playing their keys. If coverage dictates that they go his way, then they'll throw it. They made some plays.”

(So is that to say receivers are getting open more against CB Brent Grimes than in years past and if that’s a fair assessment)  -- “Yeah, I guess so. There's plays that are being made out there. I think, if you look at what we've been able to do – I say historically, I don't know how far you want to go back, but we've made plays on the ball in the secondary and we're not getting those right now. That's the difference."

(On what’s his mindset right now and what’s his message to this team)  -- “It's what I told them last night. We've got three to go, and it's strictly playing for the love of the game. Because now you're out and that in itself stings. There's no hiding that. We can call it all we want. I can run in here and have a smile on my face. It pisses me off. I know it pisses those guys off in the locker room. We created our own mess. We're responsible for it. But now, we'll find out who really loves it. We'll find out who wants to finish this thing out and who wants to play for the logo on their helmet and who wants to play for the name on the back of their jersey."

(On San Diego being 3-10, where the motivation comes from in a situation like this)  -- “Well, I know for me it comes from a team that's dying for a win right now and we're going to get everything they've got. They also have one hell of a quarterback, one hell of a tight end. They've got enough fight in them. They present their own challenges, and if we go out there and we're not ready, they'll beat the crap out of us."

(On 12 penalties last night and some of those were discipline penalties - false starts, personal fouls. How does he clean up discipline penalties as opposed to effort penalties) -- “Those are the most disappointing. You know, you’ve just got to address them. And those things will be addressed one-on-one with those individuals. I said it last night the ones where guys are scratching and clawing to make plays and something happens, hey, man, that’s part of the game. Those are the ones you have to be able to overcome because sometimes those happen. But the ones you’re talking about are totally inexcusable. There is absolutely, there’s nothing that’s OK about that.”

(On RB Lamar Miller said he was good to go towards the end of the game and if there was a reason why we didn’t see him much down the stretch)  -- “No, he just had the ankle for a while. And then we got to the point where we felt like we had to throw it a little bit more. The runs that we had, when you look at what we did in the second half, we ran really good in the first half, and we still busted a couple. But we come out and we get a one-yard gain and now it’s second and nine. We get a holding, we get a false start, we come out and run it for one. You know, I said it, there again, when you’re not efficient on first or second down when you run the ball you put yourself in a bind. You want to run it on second and 10 and now all of a sudden it’s third and 10, and that’s a problem.”

(On if he was saying at first RB Lamar Miller had an ankle issue but then later, you just felt like you had to throw more and the ankle wasn’t an issue towards to the end of the second half)  --  “What I’m saying is that he had, this is the first that I’ve heard of, that he was OK to go in the second. If that’s what he told you guys, I knew that he wasn’t in there for a spell because I saw him limp off the field. So at that point I was just trying to manage the game.”

On seeing that they are not getting much push off the ball on the rush attack and what he attributes that to when he’s getting the one-yard gains)  -- “There’s three different things that I can think of. The one play that I remember is where we don’t come off the double team on the linebacker. The linebacker hits it. So that’s a technique error, staying on a little too long. One of them is the running back. It’s a bad run. The other one is the tight end doesn’t finish the block on the backside. He’s the one that makes the play all the way down the line of scrimmage. So it’s never one guy. It’s always something different in the run game and where we were clicking in the first half we didn’t quite get those in the second half. I mean, we had a few but not enough.”

(On if there’s a point of view that says I can do without this job or the more time that he spends in it the more he hungry he becomes)  --  “I would say this: I’ve been here six years and nothing has gone the way that we wanted it to be. Every year we come in with new hope and, there again, we’re going to have another season where we have a playoff drought. I make damn sure that it stings and it hurts because the minute you go numb to that, then you’re just a loser. I want it to hurt. It motivates me and it pisses me off. It’s not too much for me to handle. To me, that’s how you get motivated to win because you get tired of losing and it stinks.”

(On with the playoffs no longer a possibility if he might be inclined to give some of the younger guys additional playing time)  --  “Yes. Yes sir.”

(On which younger players might get more playing time)  --  (CB Tony) Lippett. I think we can see some of Lippett, especially with Bobby (McCain) now where he’s at.”

(On WR Jarvis Landry, 18 targets, is he comfortable with that and if he wanted to use him that much)  --  “We’ve always felt like you feel pretty good getting the ball in his hands because he makes plays, he is a playmaker. Yeah, you would like for production to be spread out a little bit over the rest of your receiving crew, your skill position. However, there was opportunities to be made out there that weren’t made, either.”