« Brent Grimes unaware of any talk of a 2016 pay cut | Main | Keys to the game: Indianapolis Colts at Miami Dolphins »

Cynical souls out there scorn at posts like this. Powered by pomposity, they sneer at a light-hearted attempt to lift up readers on a cheer-filled day. To them I say, Merry Christmas anyway.

Love for you and yours.

And to the other 99 percent of the Earth's population I say, it is time to once again hand out gifts to the Miami Dolphins. This is not a vain exercise. This stuff works! Consider that last year, one of the gifts I handed out was a strong desire by Ndamukong Suh to play for Miami. 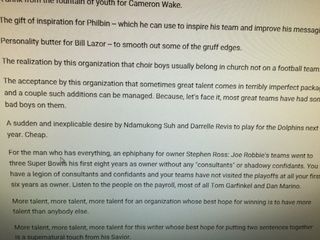 (Yeah, I also wanted Darrelle Revis and tried to gift them to the club cheap. That part didn't fly.)

So maybe somewhere in this bag of goodies for the Dolphins, a couple actually come to pass.

Let us, thus get to our holiday tradition of handing out Christmas gifts for the Dolphins:

For interim coach Dan Campbell, two eye-popping names of coordinators he can realistically hire to give his interviewers pause when the Dolphins talk to him about the full-time coach gig. Possession of those names is the only chance Campbell has of getting the job.

For Stephen Ross, the man who already has everything, something he has never had as Dolphins owner: A winning season.

For Football Czar Mike Tannenbaum, a coming season so grand that he can stop thinking of twin AFC title game losses as a success.

To Tannenbaum again, because Santa Mando really likes him, wisdom and vision as the point man to the looming coach search.

To Ryan Tannehill, a flak jacket.

And a Pro Bowl guard to go along with his Pro Bowl center.

And an insurance policy if that guard isn't added.

And a proven NFL offensive coordinator/quarterback coach who has been there and done that and had great success in the past.

And renewed health for his brother Maurkice.

To Jordan Cameron, a new scheme that lets him exploit the seam and the red zone -- as God intended when he built him.

To Brent Grimes, a return of that seemingly lost half-step.

And peace with no drama in his home.

To Lamar Miller, a game plan that allows him to carry the football 18-20 times.

To Jay Ajayi, a game plan that allows him to carry the football 15-18 times.

And to both of them, an ongoing competition for those extra four or five carries that makes them both better.

To the rest of the offense, a game plan that calls for 25 passes per game and not a whole lot more.

To Rishard Matthews, a well-deserved new contract from that team closer to home that you've been wanting.

Or from the Dolphins, which would be a surprise.

To DeVante Parker, that next step that you must take in 2016.

And healthy feet to allow that step to be without melodrama.

To Suh, more impact plays to go with your impact contract.

To Branden Albert, an offseason of staying right instead of having to get right.

To Reshad Jones, that trip to the Pro Bowl next month you so desperately want.

To Dennis Hickey, the discovery of another Lavonte David.

To Kenny Stills, that moment when reporters are talking to you about your great receiving accomplishments and not your new hair style.

A full and complete recovery to the six players on injured reserve.

Kudos to the sports science, nutrition and training staff who are obviously doing great work because last year the team had 13 players on injured reserve at Christmas.

A bright tomorrow for the outgoing coaching staff.

A bright today for the incoming coaching staff.

A joyous Christmas day for you and yours. A prosperous jubilee year in 2016. And a heartfelt thank you for coming here regularly.