« Indianapolis Colts defeat the Miami Dolphins, 18-12 | Main | The Miko Grimes saga: New epithets, Dan Campbell reaction, and does she have a point amid the vulgarity? »

Brent Grimes is an unassuming, calm individual. His wife? Not so much.

Miko Grimes, the cornerback's 40-year-old wife, has gained a reputation for being outrageous, vulgar and mostly controversial on her social media (twitter) account. Yes, she also was arrested prior to a game earlier this season for a run-in with police officers, had to get court permission to travel out of country to see the Dolphins in London while awaiting trial, and then had the charges dropped in court. 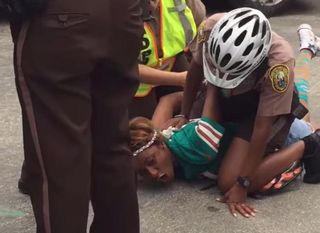 And yes, she officially seems to hate most of the media covering the Miami Dolphins.

Except the Sun-Sentinel's Omar Kelly. Kelly and Grimes did a radio show together, before she was arrested and then fired by local radio station WQAM, and so she and Kelly are cool. 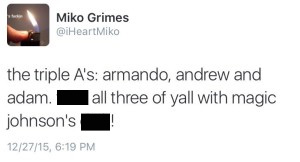 Oh, and she's not cool with Dolphins quarterback Ryan Tannehill.

My interaction with Mrs. Grimes began in the preseason when she confronted me about something that I had written relative to Tannehill that compared the Miami quarterback's stats to Baltimore QB Joe Flacco's stats. Grimes took exception to me calling her out when she sub-tweeted me saying that their records were not similar. True, I responded. Their records are not the same. But football is a team sport. And also not equal with Tannehill and Flacco is the talent or coaching around them.

Anyway, at our pleasant initial meeting she called me a "p---y."

The Dolphins met with Grimes and his wife at that time to explain that was not proper use of her press privileges. The Dolphins, you should know, have met with Brent Grimes about his wife at least five different occasions to express concern over Mrs. Grimes' colorful personality. At least five. Joe Philbin told me in the preseason he told Grimes in a meeting that he needed to address with his wife her social media behavior because, like it or not, it reflected poorly on the organization.

Football Czar Mike Tannenbaum has also been aware of the attention Mrs. Grimes has brought to the organization, according to sources, and is also not happy with it.

Anyway, after her legal incident, Grimes went underground on twitter. She required her 10,000 followers to get her permission to follow her rather than keep her account public.

She did not, however, hold back on her mindset.

That was plainly evident over the Christmas holiday when she was apparently incensed by a post on this blog reporting that Grimes was unaware about any talk of a possible salary cut for him for the 2016 season. The post also explored the idea Grimes is playing below the standards he set his two previous years in Miami.

So Mrs. Grimes took to twitter and said she was going to confront me again and "spit in his face," meaning mine. She should be aware spitting in someone's face in the state of Florida can be prosecuted as battery -- a misdemeanor punishable by up to one year in county jail. She also addressed me as a "fat p---y."

Anyway, after spending part of her Christmas eve and Christmas day venting, often in vulgar terms, Mrs. Grimes decided to widen the scope of her holiday spirit. She went after other reporters and then Sunday night went after Tannehill.

The Tannehill attack most importantly: It is not new. Grimes often criticized Tannehill on that radio show she was fired from on WQAM. I didn't know this until Sunday evening because I didn't listen. But if I had, I would have written about that criticism then. You see, for a journalist to criticize the Dolphins' quarterback when merited is in bounds. It's part of the job. But when that "journalist" is also the wife of one of the team's defensive stalwarts that becomes news.

But that doesn't matter any more because, again, Mrs. Grimes was fired from her "journalist" job. So now she's simply the wife of the team's star cornerback. And she tweeted this Sunday night about the team's quarterback: She said she knew Tannehill "stunk" the minute she and Grimes signed but tried to hold her tongue because she didn't want to affect the cornerback's belief in his team. She also tweeted: "I should've known we were gonna lose when I heard we didn't complete a single pass in two minute drills this week against the practice squad defense." She added: "My Column: how many people does Ryan Tannehill have to get fired before you realize he's the problem." 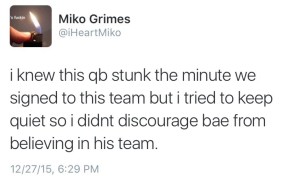 Tannehill seems to be something of a burr for Mrs. Grimes. Indeed another reason she recently said she is upset with me is that she perceives me as defending Tannehill too much. She wrote on twitter that I "am up Tannehill's a--."

I can confirm that this is factually inaccurate as I most certainly am not "up Tannehill's a--." I just wrote a column wanting to trade Tannehill to New Orleans.

Mrs. Grimes also seems to be peeved with the Dolphins because they, in her words, allow their media to "destroy the defense and make it look like Tannehill is not the problem." 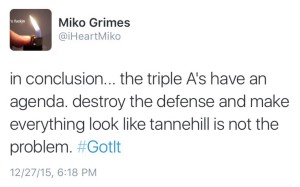 For the record, the media does not belong to the Dolphins. The Dolphins are an entity the media covers for their respective outlets. So the Dolphins cannot allow or disallow the media from reporting anything. But the greater point is Mrs. Grimes sees some sort of conspiracy in the media over their coverage of the team's quarterback versus their coverage of the team's defense. And that leads to the question whether Brent Grimes also believes the team he plays on has different rules for the quarterback and different rules for defensive players.

The Dolphins are aware I am writing this. I reached out to the team's media relations department as well as a couple of people within the organization. They are not happy about the undue publicity.

I get it. A team that is looking bad on the field (5-10) doesn't need to look bad off it as well. Indeed, the Dolphins do a lot of philanthropic and noteworthy things off the field to build their brand and reputation among their fans and in the South Florida community.

Miko Grimes ignoring repeated requests from the team to tone it down and be classy and her unhinged social media rants don't help that cause.