Grimes (and Miko) out; Byron Maxwell in: Net gain?

By the time free agency begins at 4 p.m. on Wednesday the Miami Dolphins believe they will have improved at the cornerback position because they are effectively replacing Brent Grimes with Byron Maxwell, per team sources.

Their plan as of this writing was to trade or cut Grimes, the Pro Bowl cornerback they know intimately, and add Maxwell, a much-maligned Eagles cornerback about to go to his third team in three years. And, those an many other facts considered, that will feel like a net plus for the Dolphins.

Well, in cutting Grimes the Dolphins can save between $6.5-$8 million in cap costs, depending on whether they designate him a pre June 1 ($6.5 million savings) or post June 1 cut ($8 million savings). If they find a team looney enough to trade for him, the savings is similarly $6.5 million but obviously they would get compensation in return. And what does all that do?

They get rid of a huge headache. In short, they move out a 32-year-old cornerback who had matchup issues against bigger receivers, didn't play as well in 2015 as he had in the past, was scheduled to make a lot of money, and came packaged with issues best described in two words: Miko Grimes.

That's what cutting or trading Grimes slices from the roster. More on all that in a moment.

In adding Maxwell, who is 6-2 and 200 pounds, the team added length to their secondary to compete against such receivers as Brandon Marshall and Eric Decker of the New York Jets and Sammy Watkins of the Buffalo Bills. The team also got younger in that Grimes is 32 and Maxwell is 28. And Maxwell will cost the Dolphins $8.5 million against the 2016 cap, or exactly $1 million less than Grimes, who was scheduled to cost $9.5 million.

And in the exchange the Dolphins also save themselves the headache named Miko.

Obviously, this is what the exchange -- should it happen as expected by Wednesday -- looks like to the Dolphins on paper. But what about on the field?

What about Maxwell's much-maligned play for the Eagles in 2015? Remember, he is traded from Philadelphia because a new braintrust, comprised of a new coaching staff and the return of Howie Roseman as GM, sees Maxwell is more valuable gone than on their team. He's viewed as part of the problem in Philly rather than part of the solution. That has to be weighed and viewed critically because adding Byron Maxwell is definitely not a slam dunk great idea.

It must also be said part of the reason for the Maxwell criticism coming out of Philadelphia is that he signed a six-year, $63 million contract with the Eagles after playing well for the Seattle Seahawks. But the problem wasn't that Maxwell was terrible, although he definitely could have played better. The problem was Maxwell's contract paid him an average of over $10 million per season but he played like someone worth half that amount.

Expected to play like a Darrelle Revis, Maxwell instead wasn't even quite himself. And that unmet expectation, caused by the high salary, turned him into a free agency bust.

The Dolphins mitigate that issue slightly in 2016 in that he's no longer a $10 million player for them. Again, he's costing $8.5 million against their cap. They also were working on restructuring Maxwell's 2017 numbers so we'll have to see where those land.

Look, this isn't the Dolphins adding Richard Sherman. Indeed, Maxwell might not be quite as productive as Grimes was on the field even if he is a better matchup for their defense against those big receivers I mentioned.

But on the cap and in the locker room, this is an understandable move.

Here's the reason the welfare of the locker room has to be weighed: 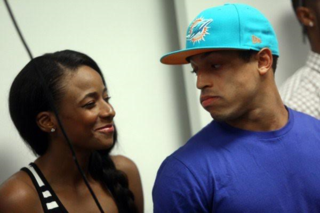 Grimes, unassuming and uncontroversial, was a nightmare for the Dolphins the past couple of years because his wife Miko Grimes was so out of control not even her husband could manage her. Mrs. Grimes, notorious for her activity on social media, last season caused a commotion within the Dolphins locker room after she took to twitter to say players did not believe in quarterback Ryan Tannehill. She called Tannehill a loser. She tweeted things that supposedly happened during practice -- such as Tannehill failing to connect on any two-minute drill passes -- even when interim coach Dan Campbell said the club had not even practiced two minute drills throws that week.

Tannehill called the attack from a teammate's wife "a distraction" to him personally on a game week and Grimes said he apologized to the QB.

But in a year the Dolphins are trying to rehabilitate Tannehill both on the field and within the locker room -- as a leader and player who is a source of team confidence -- the team didn't want a dissenting voice constantly working against them. And especially not when that voice was perceived to come from within the so-called franchise family.

Mrs. Grimes, arrested before one game last season and usually vulgar in her approach to conveying her thoughts, is the reason the team met with Grimes at least half a dozen times, according to team sources. Those meetings and conversations with head coach Joe Philbin, executive vice president Mike Tannenbaum, and others, tried to get Grimes to stop his wife from embarrassing the franchise. They yielded no change in course.

Sources say Grimes would tell the team he did not share his wife's opinions and wasn't responsible for how she expressed herself. But that excuse rang hollow this offseason. The Dolphins made Grimes accountable for his wife. And his wife showed no ability to rehabilitate her approach. Indeed, Monday night, after a day of rumors about Grimes getting cut or traded, I tweeted (@ArmandoSalguero) in 140 characters what I've said here: That Mrs. Grimes is a reason Brent Grimes is out.

And her measured and thoughtful response on twitter was to threaten to do me bodily harm by way of gunshot wounds.

the fat bitch armando thinks he's safe from bullets bc we might be released is the funniest part of this whole thing.

Even as Mrs. Grimes is partially responsible for causing her husband to be escorted out the door from his current team she is already hurting his value with his next team by making hollow Internet bully threats. What right-thinking team reads that tweet and decides it wants to pay Brent Grimes more rather than less money? (Yeah, she'll read this paragraph and immediately delete the tweet.)

And so now the couple is headed out the door.

By the way, I am convinced the Dolphins would not have done this if Grimes played in 2015 as he did in 2013. But he didn't. And because he is now two years older, not quite as productive, more expensive, and the wife is a problem that is hard to manage, he becomes expendable. In short, any player's status becomes uncertain when his production decreases while his headaches, cap numbers and age increase.

So the Dolphins lose an exceedingly athletic cornerback, their best the past three seasons. They gained a bigger, younger cornerback whose family isn't likely to rip the starting quarterback or threaten to shoot moi on social media. And the exchange saves the team salary cap room in 2016.

The Dolphins must believe that to be a net gain.