Ease into the 2016 regular season? Nope. Not going to happen for the Miami Dolphins.

The Dolphins will open their 51st regular season on the road. At Seattle. Against a Seahawks team that is a perennial Super Bowl contender. After traveling what is the longest road in the NFL for games played in the continental USA -- between Miami and Seattle.

The Miami Dolphins schedule gets much easier the following week. Not really.

The Dolphins will travel to Foxborough to play the defending division champion New England Patriots the second week of the season. on Sept. 18. Miami's home opener will come in Week 3 against the Cleveland Browns, Sept. 25.

The first month of the season includes three away games as Miami travels to Cincinnati on Sept 29. That game will be a primetime Thursday night game.

The Dolphins will host the Patriots the final week of the season at home. It'll mark the second consecutive season Miami finishes with the Patriots at home.

The Seahawks, a Super Bowl team in 2013 and 2014, are 3-3 in the six season opening games played under current coach Pete Carroll. So this team doesn't necessarily start fast. The Dolphins last played the Seahawks in 2012 and won, 24-21 when Ryan Tannehill directed a fourth-quarter comeback in which Miami outscored the 'Hawks 17-7 in the fourth quarter.

The Dolphins have two other games against west coast teams -- at the Los Angeles Rams and San Diego Chargers. The team was hoping those games will be back to back and that's exactly what will happen. The Dolphins will visit San Diego first on Nov. 13 and then the Rams on Nov. 20. Expect the team to stay on the west coast that week between games.

The Dolphins asked the NFL to put them on the road early in the season so as to guarantee that the construction at their stadium, which will soon get a naming rights sponsor, would be complete and the season-opener in the new place could be an event. The NFL obviously granted that request.

Interestingly, the hot (humid) weather advantage the Dolphins have enjoyed in decades past when team visit Miami early in the season will not factor Week 1 or Week 2.

The Dolphins, in an odd scheduling quirk, played at New York the weekend after Thanksgiving in each of the past three seasons. That has meant Thanksgiving in New York for the Salgueros. But it has also meant manageable weather for the Dolphins.

This season they're going to the Big Apple on Dec. 17 -- meaning the chances of a colder, gustier less hospitable weather increases. 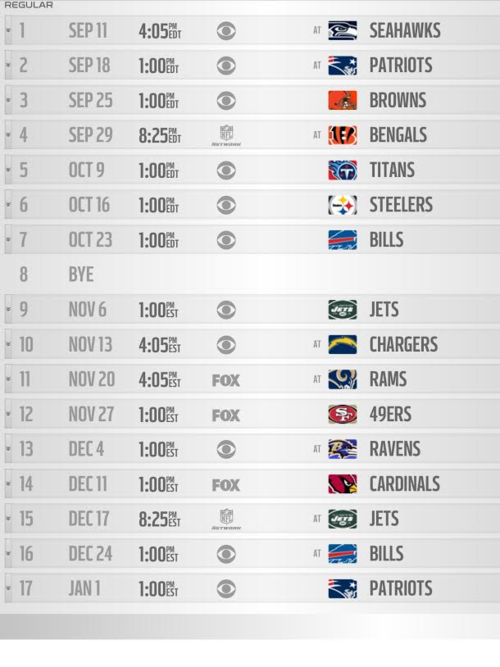