Rookie minicamp Day 1: What they said and did

The Miami Dolphins had the start to their rookie minicamp Friday and it was about getting to know everyone and feeling out what being a member of the team is about.

“What we basically did this morning was football," coach Adam Gase said. "They were in the classroom and then we got them with (Head Strength and Conditioning Coach Dave) Puloka in the weight room and kind of their introduction there. Then this afternoon will be a lot of things, whether it’s dealing with kind of how to go through the adjustment. Dealing with (the media) is different than what it is in college and how accessible they are. The Sports Science Department we have is … We have a big group and there are a lot of things that they offer. And then a lot of the things that (Director, Player Engagement) Kaleb (Thornhill) brings to the table with the player engagement stuff.

"So there are some different things set up. We’ll bring in a speaker on both days to kind of inform our players and let those guys understand kind of what it takes to be a pro. And then at night after dinner, we go back to football. For the coaching staff, they have the flexibility since there are so few guys and there’s a lot more one on one time … we’re able to have in the bubble. We can go over to the bubble and (Wide Receivers Coach) Shawn Jefferson (can) get those guys out there and say, ‘OK show me this formation,’ and ‘Line up in the correct splits.’ The thing that we were just trying to avoid was the offense vs. the defense. I think for what we’re looking to do, (which is) to get these guys caught up to speed with the veterans, we felt like this gave us our best chance.”

What is Gase looking for out of him?

The Dolphins made multiple players available to the media, and Jakeem Grant stole the show. So check out the post on him as I start praying he makes the team.

The Dolphins hope Howard is good enough fast enough that he can be a starter. They need him to be a starter fairly quickly. But Howard isn't viewing it that way.

"I really don’t look at it like that," Howard said. "I’m just coming in here to make plays and hopefully be a starter. I love that they’re talking about it but I’ve got to live up to my expectations that I have for myself."

“I need to chill out with a lot of penalties that I had in college and really my technique. (I need to) get better in my technique. Not false stepping and stuff that my coach used to tell me in college. That’s really, basically it. I’m improving on everything around but I (have) good ball skills and being physical but I (have) to clean stuff up and make me an NFL corner."

The Dolphins are hoping to get more out of running back Kenyon Drake than carries from scrimmage. They want receptions because he can be a matchup problem. They think he'll help playing special teams. He might even get a chance to return punts.

"I don’t necessarily have to be in the backfield to make a play. I can be lined up out wide in the special teams game, not necessarily just (to) return the ball, but kickoff, run down, (and) make a tackle on kickoff. I feel like I try to make the most of every opportunity that I have on the field (and) play every play like it’s my last play. I give every effort – my maximum effort – in every play and just go with it.

"I want to come here and definitely display my versatility. Not necessarily in my game specifically, but if I can cause a mismatch and make a defense play to me, that leaves somebody else open and we have a multitude of weapons on this field that can be utilized. That just opens (up) a game plan even more for everybody else.”

Drake played for former Dolphins head coach Nick Saban at Alabama. I asked Drake if he had any good stories about Saban and that apparently struck a nerve for this young man.

"Next question," he said.

Someone should inform Drake he's in the NFL now. He's been liberated but obviously doesn't know it yet.

The Dolphins handed out their numbers today to their rooks. Take a look ... 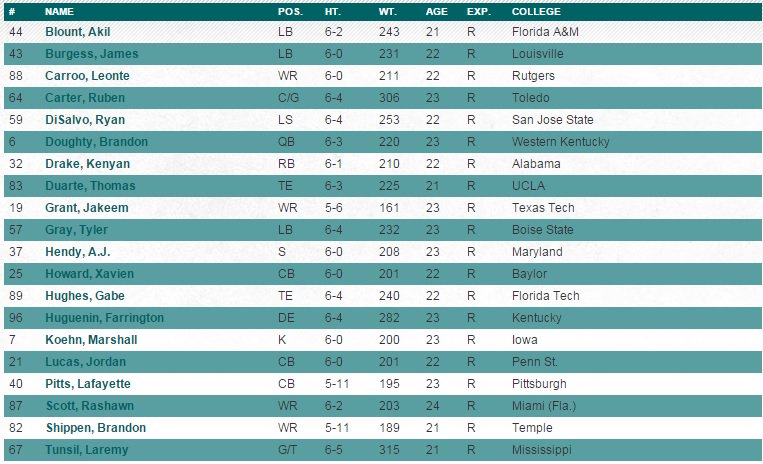