The first depth chart of the 2016 season is out this morning for the Miami Dolphins and here are some interesting tidbits:

The starting running back is Jay Ajayi. This despite the fact Ajayi missed a few days of practice with a bone bruise to a knee and Arian Foster took the first-team work those days and was impressive. Foster is second team and Damien Williams, who also missed time this training camp, is third team.

Dallas Thomas is listed at the starting left guard. Rookie first-round pick Laremy Tunsil, who is expected to have this job by the time the regular season rolls around, is listed as second team left guard.

No surprise at starting center with Mike Pouncey, but backup center right now belongs to first-year player Anthony Steen. He is ahead of Jamil Douglas, who played in Pouncey's absence last year.

Earl Mitchell, who is coming off a less than stellar season in 2015, remains a starting defensive tackle with Ndamukong Suh ahead of rookie Jordan Phillips. Chris Jones, a veteran of three previous NFL seasons, is listed as the other backup defensive tackle.

No surprise at starting safety with Reshad Jones and recently acquired free agent Isa Abdul-Quddus at the other spot. It should be said that Abdul-Quddus has been off the field in some nickel packages since the start of camp with either Bobby McCain or Michael Thomas at the slot corner.

[Update: The Dolphins have waived/injured Ekpre-Olomu this morning. All the buzz about his signing in the spring resulted in ... nothing. Ikpre-Olomu sustained another ACL tear, this time to his other knee during a practice Saturday. The injury happened inside the team's bubble, which has field turf. He's done for the year and done on this team for now. The team has added free agent Al Louis-Jean to fill the spot.] 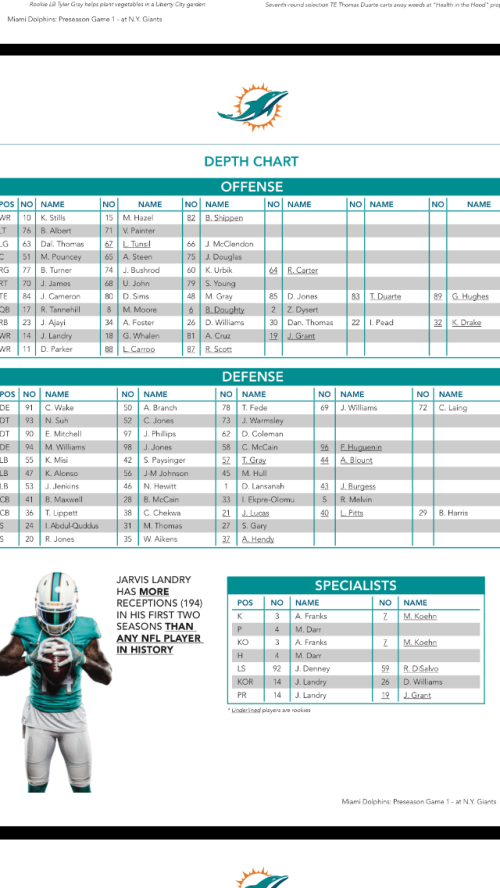 The Dolphins returned to practice Monday morning. Well, most of them.