Welcome to The Rock!

That little line from the movie The Rock now applies to the stadium the Dolphins have spent the past two offseasons renovating at a cost of approximately $500 million. Indeed, the reason the line will apply is because the Dolphins have locked in their naming rights for the facility.

This is huge news for the team because this deal will give the facility its name for a long, long, long time. I'm told the deal with Hard Rock International is so long, that kids entering kindergarten this fall will graduate high school and the name on the stadium when they get their diplomas will still be Hard Rock Stadium.

So this deal will go past a dozen years. That's very important because the facility has been the unofficial king of names in the past.

Hard Rock is the eighth name on the place since it opened in 1987.

I'm told there will not be a huge guitar fixed atop the new canopy of this stadium as it hangs outside Hard Rock Cafes around the world. But there will be typical Hard Rock trademarks, including the guitar, around the stadium and at the entrance to the main parking lots at Gate Four. 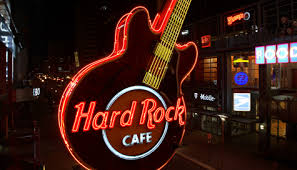 Today's deal wasn't exactly a secret. I told Mike Florio of ProFootballTalk.com that Hard Rock International could buy the naming rights back in May.

Hard Rock International is owned by the Seminole Indian tribe of Florida. But the stadium name will make no reference to the Seminole Hard Rock Casino that is approximately 15 miles north of the stadium per terms of the deal. The NFL, which wants to protect its brand, is often uncomfortable with its teams being tied to gambling of any form.

The NFL approved this deal this week.

The Dolphins are declining to confirm the deal at this hour. But there should be a press conference as early as Thursday.

Hard Rock Stadium will be the home of the Miami Dolphins, the Miami Hurricanes, the Orange Bowl Classic, and Super Bowl 54 in 2020, a game South Florida was awarded during the Spring.

Dolphins owner Stephen Ross has said he and the South Florida Super Bowl Host Committee will continue to bid for Super Bowls and eventually wants to bring an NCAA national championship football game to his facility.

After its naming right deal with Sun Life expired months ago, the Dolphins kept the name on the stadium until recently. Just prior to this deal with Hard Rock, the Dolphins' stadium was one of only seven in the NFL with a naming rights deal.