In the days following their much-heralded pregame protest in Seattle, the four Miami Dolphins players who kneeled during the national anthem decided they needed to move past making people aware of what they see as social inequalities for black people, and start doing something about it.

The players decided it wasn't enough to point out that some black men are being shot by some police at a seemingly higher rate than anyone else even as they continued their kneeling protests last Sunday in New England.

The four -- Kenny Stills, Jelani Jenkins, Michael Thomas and Arian Foster -- decided they needed to move into a solution mode.

And that's what Tuesday was about for the players: Taking a first but significant step toward finding solutions to the problem.

So with support from the Dolphins organization, and RISE (The Ross Initiative in Sports for Equality -- a nonprofit Dolphins owner Stephen Ross founded to promote understanding, respect and equality), the four players invited community leaders, police officers, and team personnel to a Dolphins Town Hall to discuss the issues of concern and start looking for ways to address them. 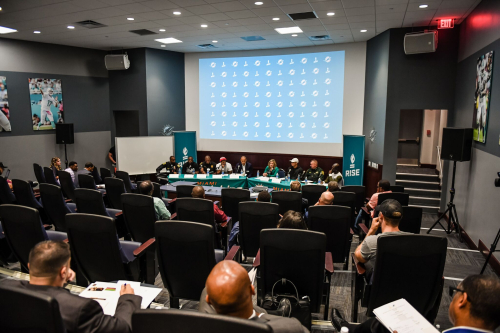 "In terms of what happened the players that chose to take a knee really wanted some conversation and dialogue to happen," Dolphins Director of Player Engagement Kaleb Thornhill said Tuesday evening. "Obviously some of them were aware of RISE but not to the extent of what is beginning to happen around the country with what Mr. Ross created. What we wanted to do is put them in a position to speak with RISE to talk about action because that's what they wanted.

"Obviously, they wanted awareness, but they also wanted to do something proactive and doing something within the community and reaching out and being part of the solution."

Thornhill, Dolphins Senior Vice President of Communications and Community Affairs Jason Jenkins, and the four players spent time last week finding a way to start a dialogue within the community to brainstorm for solutions. 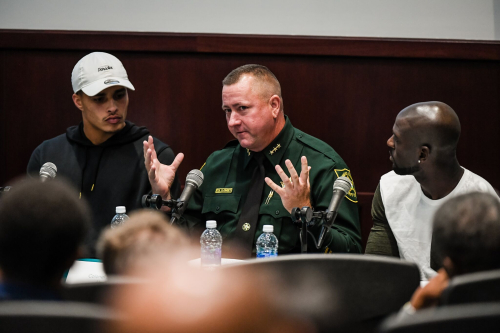 They wanted people engaged with youngsters in the inner city and sports so they invited Luther Campbell -- Uncle Luke or Luke Skyywalker to those who know him in the community or as a rapper and record label mogul -- and he came to the town hall.

The four players had already spent time on the telephone with Robert O'Neill to gain from him his thoughts on the meaning of Old Glory and Star Spangled Banner. O'Neill, by the way, is a former Navy sailor, Navy SEAL and Member of SEAL Team Six.

He is, by most accounts, the man credited with taking the shots that killed Osama bin Laden during a May 2011 raid on the terrorist's compound in Abbottabad, Pakistan. Yes, for God and Country.

The players also spent time on the telephone with a retired U.S. Army Captain who received the Medal of Honor at the White House in 2015 for his actions during Operation Enduring Freedom.

I am not at liberty to divulge this hero's name now because he didn't know his conversation with the Dolphins players would get into the press and he was not available Tuesday evening to give permission to use his name. But suffice to say the captain has been quoted in the press before and among his thoughts are this:

"The proudest thing I have ever done in my life is to wear this uniform and serve my country," he said.

Both O'Neill and the captain made their perspectives about flag and country clear to the players. The captain, I am told, said to the players the right to protest is one of the rights he fought for.

During the meaty part of the two-hour town hall the four players explained to the police, to Dolphins staffers, to every one of the 50 or so people present, why they kneeled. None of the players were available for comment on this Tuesday night although explained their reasons in the locker room after the Seattle game.

"What was talked about was really the players went through and clarified why they decided to take those actions when they chose to take a knee," Thornhill said. "They clarified that they have the utmost respect for military members and law enforcement and it was about something bigger than that. They wanted to see change, knowing there are social inequalities that currently exist. They wanted to start a dialogue around those. The guys did a great job of explaining, which led to feedback from community leaders."

The police officers and youth coaches spoke as well -- outlining from their perspectives why the issue exists and obviously giving their opinions on the topic. Police protocols were explained. The officers also discussed how some changes are in the works and some challenges are keeping some things as they have always been.

A source tells me one officer related a story in which he met a five-year-old who told him he didn't like him (the officer). The officer asked why.

"Because you're going to kill my daddy," the boy said.

And then the agenda moved to the solutions stage.

The first step was to see what a solution looks like. The idea was to set a vision for how things should be, or how everyone would like them to be. That was followed by a game plan building stage meant to attack the problem.

This is where solutions were offered. Those included:

Focusing on kids in schools and better educating them about police.

One idea is going to be implemented first -- as in Sunday when the Dolphins play their home-opener against the Cleveland Browns at Hard Rock Stadium.

The team will host a pregame tailgate that will bring youngsters from hard hit neighborhoods and families to Hard Rock for a tailgate that will also be attended by police officers and other youth leaders. And after that tailgate, everyone will go inside the stadium to watch the Dolphins play the Browns.

Although all the details have not yet been worked out, the four players pledged to pay for the purchase of food and other items for the tailgate event and tickets to the game.

The idea behind the tailgate event is to encourage interactions between kids and police.

"Those kind of conversations is where there's mutual respect and people aren't seen as abstracts," my source told me. "They're seen as human beings." 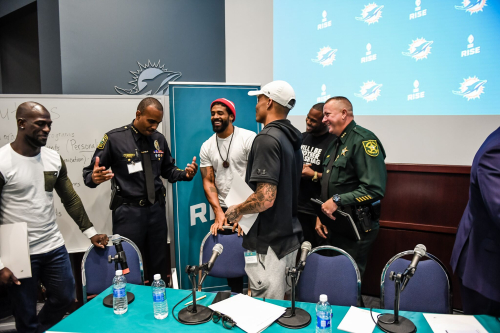 Said Thornhill: "The players want to be fully embedded into the doing part. Knowing they're time is limited during the season ...they wanted to do something this year. With the tailgate idea, I know they may not be able to be there with the obligations of the game, but maybe there's a chance for us to integrate into the schools on a Tuesday or on a community service day with some law enforcement or during the offseason where they can get into the doing that.

"They're not shying away from using funds or innovative ideas that lead to solutions. We're not just trying to bring awareness. They're fully engaged into solution-based ideas dealing with social issues they feel extremely strongly about."