The Broward County Sheriff's Office Deputies Association, a union that represents local deputies in the county's largest law enforcement body, is calling for the suspension of details that escort and otherwise protect the Miami Dolphins as a response to four players kneeling during the national anthem in Seattle last Sunday.

Jeff Bell, president of deputies local 6020, says he has contacted the association's executive board in order to make everyone aware of the protest undertaken by four Dolphins -- Jelani Jenkins, Arian Foster, Kenny Stills and Michael Thomas -- and urged the board and all law enforcement to cease detail work for the Dolphins.

The players had been protesting what they said is a lack of equal justice for some African Americans at the hands of some police.

The letter from union president reads as follows:

"Today, I contacted the executive board of the Broward Sheriff’s Office Deputies Association Local 6020 in reference to the actions of a few Miami Dolphin players. As a law enforcement union, we certainly encourage people to exercise their constitutional right of freedom of speech. However, in certain professions, an individual’s freedom of speech must take a back seat to the organization or government entity that they choose to represent. Even the NFL’s governing body and the ownership of individual teams set strict policies in order to make sure players represent the league in the most professional way.

"With this said, I can not fathom why the Miami Dolphin organization and the NFL would allow the blatant disrespect of the American Flag and what it stands for during the national anthem. It is a privilege to play in the NFL, not a given constitutional right. The Miami Dolphin players, staff and family members enjoy full police escorts from the Broward Sheriff’s Office on a regular basis. These escorts often involve putting the men and women of law enforcement agencies at risk as they block intersections during peak traffic times in order to expedite the travel time between facilities.

"We have buried coworkers who have unnecessarily lost their lives protecting the lives of individuals. Some law enforcement officers even lost their lives while protecting the lives of the very same individuals who were protesting against law enforcement. The Broward Sheriff’s Office Deputies Association Local 6020 is seeking the immediate termination of all Miami Dolphin escorts until such time the Miami Dolphins and the National Football League set forth a policy that will not tolerate the disrespect of the American Flag and National Anthem during any sanctioned games or events.

"We no longer support an organization that values financial profit over a minimum conduct standard. What good is it to ask singers to sing the national anthem, honor guards to preform services or ask the United States Air Force to conduct fly overs during the National Anthem if the same organization will not even set a minimum code of conduct for its players?

The Dolphins players were supported in their actions by Dolphins owner Stephen Ross, who defended their right to protest. The club was not immediately available for comment. 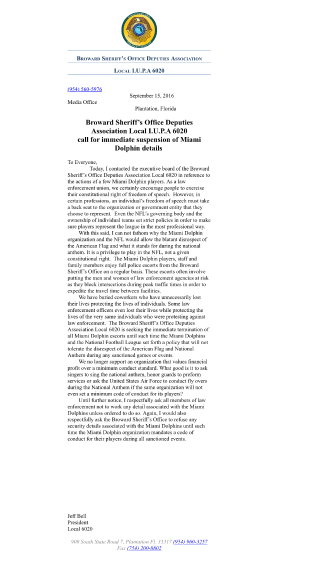