Terrelle Pryor was giving everything he had, were all the Miami Dolphins? (updated with complete snap count info)

The most impressive player on the Hard Rock Stadium field Sunday after was Cleveland's Terrelle Pryor.

He played receiver and caught eight passes for 144 yards. He played quarterback and completed 3 of 5 passes for 35 yards. He also ran four times for 21 yards. Yes, he was tired after the game but he didn't beg out of the game once because the game is important to him.

"There's God, Jesus, my son, then football, and that's it for me," Pryor said after the game. "Football -- this game means the world to me."

And I'm wondering how many Dolphins players play like the game is everything to them.

Byron Maxwell? He trailed Pryor across the field all afternoon. Obviously it was not a great day for him. Maxwell had seven tackles because, well, somebody had to tackle Pryor after he caught all his passes. He had three passes defensed. Not a great day for Maxwell.

Reshad Jones? Jones was the second best player on the field Sunday. He led the Dolphins with 10 tackles, had half a sack, three tackles for losses and one pass defensed. He was simply outstanding.

"He’s really shown me what a really great defensive player looks like," coach Adam Gase said. "I don’t know if I’ve ever been around one that good in his prime. I know I was around Brian Dawkins there, but that was later in his career. Just watching Reshad day in and day out…the way he plays, I wish all our guys played with as much effort and heart as that guy plays.”

“I’m just trying to be consistent and do everything I can to help the Miami Dolphins win football games," Jones said Sunday. "I think that’s what I’m doing.”

Jones, by the way, sat out the much of the offseason camps and conditioning program because he was unhappy with his contract. He's playing like he working for a new contract.

My hope is the Dolphins start working on this now rather than next spring or next season. Send Jones a message that you are indeed a priority. And by the way, it wouldn't hurt to send that message while the price for extending him is lower rather than higher -- which it will be by next offseason.

Buy lower now, with now being defined as this year.

Had the Dolphins done that with Lamar Miller or Olivier Vernon -- making a good offer on them in 2014 instead of after 2015 -- they might have kept one of those guys. Hopefully the team has learned the lesson.

If you listen to Gase, and he said things Sunday that make me believe he's going to get this team franchise right eventually, you hear hints of guys not trying enough or not grinding enough or not straining enough to be better and play better.

Who is he talking about?

I know Gase is not thrilled with right tackle Ja'Wuan James right now. James got benched in overtime.

He had given up a strip sack to Corey Lemonier that almost cost the Dolphins the game in the fourth quarter. Billy Turner took over at right tackle for James.

I'm not sure Gase is loving the effort he's getting out of DeVante Parker, either.

Ah, yes, Ger Flanders I'm glad you finally recognized how poorly it looks to criticize the author of the blog when he has addressed the issue you raise in his column, which you obviously did not read before commenting. As to the Parker TD catch Sunday ...

Yes, Parker had a touchdown catch. But if you watch him run pass patterns it's sometimes done the way the coaches want and sometimes done ... like it's a spring practice. If DeVante Parker is going to reach his potential he needs to play 100 MPH every snap whether he's going to get the football or not.

Mario Williams had a tackle Sunday. The tackle was for a loss. He also had a QB hurry. Forgive me for saying this, but I expect more from Williams. No, I don't need a sack every game. But Williams should be felt every game. Cleveland left tackle Joe Thomas, admittedly an outstanding player, practically erased Williams on Sunday.

What follows is not a Gase concern or worry but rather a Salguero one:

Ryan Tannehill needs to be better.

Once again Tannehill delivered an uneven performance that suggested he's two different guys. He was horrible in the first half on Sunday, throwing two interceptions, including a pick six. His line was 12 of 19 for 126 yards with the two picks and one TD.

In the second half, he was 13 of 20 for 193 yards with two touchdowns and no interceptions.

Football games have two halves. It's been this way for a long time. It's not a new NFL rule. The quarterback needs to show up in the first half as well as the second. I kind of let it go the first couple of games because, well, Seattle and New England.

I'm not grading on the curve against Cleveland. That first half was not winning football by Tannehill.

The Dolphins seem to have addressed the problem with Cameron Wake getting enough snaps.

Wake played a season high 36 snaps in Sunday. He played mostly on passing downs but also was in the game in critical situations on early downs.

Wake played one more snap than presumptive starter Andre Branch. That was the first time this season that happened. 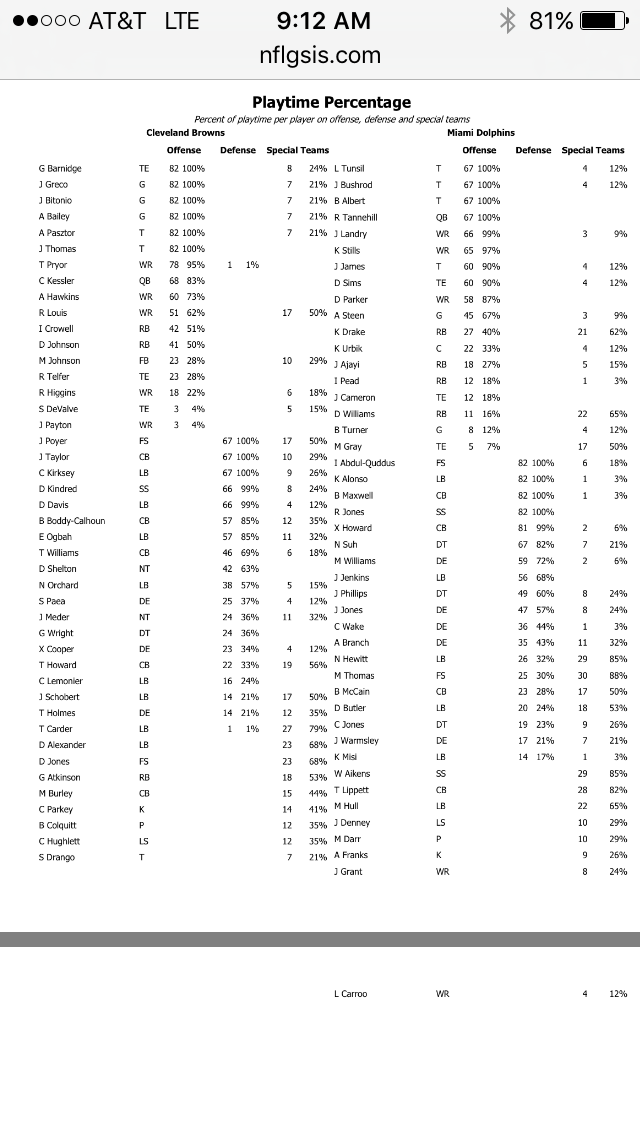