Making the announcement on Uninterrupted, Foster thanked the Dolphins and said he appreciated his time in the NFL but that his body and his desire to accomplish were no longer on the same page.

The move which Foster has been considering for some time was precipitated by another injury setback. He suffered a calf injury in Sunday's game against Buffalo. Foster, who has been dealing with multiple groin and hamstring issues -- soft tissue issues -- since joining the Dolphins. And he simply didn't have the desire to fight through another rehabilitation, per sources.

This has been brewing for some time, even before the most recent injury setback. That's one reason I asked offensive coordinator Clyde Christensen today whether Foster needs monitoring now that he has a secondary role on the team -- a role he hasn't had in the NFL since perhaps his second year in the league.

“He’s like everyone – he’s got a role," Christensen said. "I don’t know if he’s been secondary as much as he’s been recovering from an injury. He hasn’t been healthy. He’s been nursing that thing. He’s been fighting to get back on the field.

" I’d probably stop short of saying a secondary role, his role is still really, really important for us. Maybe it’s not in carries, which would be the out-front thing you measure, but as far as presence and some of the things we ask him to do, yes. He’s no different from anybody; he’s got to keep fulfilling his role.

"We won a couple of games. There’s a long way to go in this thing. We’ve got to keep improving and everyone’s got to keep doing what they’re supposed to be doing and he would fall in that category too. It is bigger than carries, if you will, in a lot of cases.”

The Dolphins have no official comment on Foster's retirement at this time. The club is obviously aware of Foster's departure and prepared to go forward without him, I'm told.

Foster leaves the NFL a much bigger star within the league than with Dolphins fans. Yes, he had 6,527 rushing yards during his impressive career. But the injuries this season made him only a footnote. He played only four games for Miami and gained a total of 55 yards on 22 carries for a 2.5 yard-per-carry average. 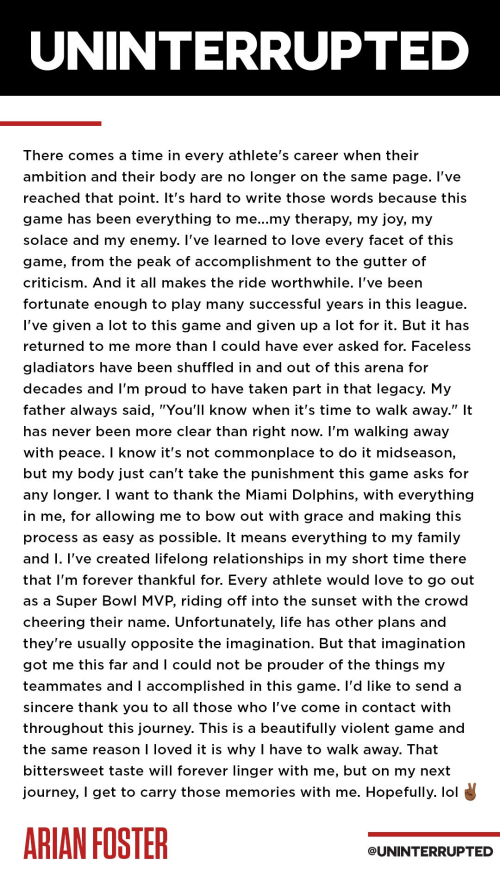