It was an outstanding win Sunday. Truly impressive. Truly inspiring. I thank the Miami Dolphins for giving me the opportunity to write a winning team column that didn't rip the team at least once this year. Last time the Dolphins won, you'll recall, against Cleveland, I ripped the team.

Not this time. This was fun.

But there were moments that made one feel the Dolphins were just being the Dolphins. And I want to go over some of those here even as we recognize that, unlike previous games, the team overcame those flubs and mistakes.

We start with the dropped TD pass by DeVante Parker. I was told last week by a Dolphins source that one of the team's issues was the inability to overcome bad moments. Typically, the team would have a penalty or assignment bust or dropped pass or dropped interception or something would go wrong.

And there would be no recovery. And that's what that Parker drop was. It erased a Ryan Tannehill TD pass in the first quarter and the Dolphins had to settle for a field goal. That's four points left on the field, thanks to Parker -- who by the way, also seemed to have an inconsistent day running routes. There were a couple of routes where he simply didn't seem to be maxing out on the effort scale.

Then in the second quarter, the Dolphins got a TD pass from Tannehill to tight end Dominique Jones. TEs catch TD passes in the red zone. Never forget that. But this TD was wiped out when Ja'Wuan James was flagged for lining up illegally.

Now, I am told the Dolphins examined the still photos of the formation and James was not lined up illegally. The receivers were lined up correctly. Their point to the officials was good. And this penalty should not have been called.

It was. And the TD was nullified. And the Dolphins had to settle for another FG.

And the whole time I'm thinking, same old Dolphins. Failing to maximize. Failing to overcome adversity within a game.

On this afternoon, those setbacks were merely a setup for success later in the game. The offense overcame.

Jarvis Landry, who played poorly last week against Tennessee, played well against the Steelers. He brought the production of seven catches for 91 yards and also brought attitude. Fine day.

So he overcame a bad day last week.

Jay Ajayi, left behind in South Florida for the season-opener in Seattle, had five really bad days in September that led to missing that trip and heading to the doghouse instead. He worked himself back. Earned his way back. And is now he is the team's obvious bellcow back.

He got 25 carries for 204 yards. And I'm really impressed by the 204 yards because it is the fourth-most by a Dolphins back ever behind a couple of Ricky Williams 2002 performances and a Lamar Smith playoff game performance. But the 25 carries is notable because the team recognized a hot back and stayed with him.

Shuttle system? Yeah, Damien Williams played and carried six times. Yeah, Arian Foster played and got three carries. But not so much.

The Miami Dolphins have found their new starting running back and it's not the guy who's been to Pro Bowls before. Coaches have handed the reins to the running game to Jay Ajayi.

"I just use everything that's gone on, just from the talk of us not being a good group that can help this team win, talk of there might not be qualified backs in our room, just that Week One issue, just everything has all been motivation not just for myself but our whole room," Ajayi said.

So Ajayi overcame adversity of sorts.

The Dolphins coaching staff? I'd say they overcame some adversity.

Look, seven days ago the Dolphins were feeling the burn of a loss to Tennessee that made the season feel lost. And everybody was looking at everybody sideways. And this coaching staff did stunning things.

They cut two offensive linemen who started that Titans game. One of those cuts should have been made after last season. Dallas Thomas has no place in the NFL. But Billy Turner? He started out of position. He was a high enough draft pick. He had position flexibility.

And yet this staff saw Turner basically shut down the final series or two against the Titans, giving up a couple of sacks on Ryan Tannehill, And coaches decided that's not the type of player that belongs on the Miami Dolphins longterm.

That's not all. This staff saw lazy play from Mario Williams and Byron Maxwell and called them out on it.

Cameron Wake got the start and the bulk of snaps at left end. He played a season-high 45 snaps, which is 75 percent of the plays.

And the move worked. Wake had 1/2 a sack and was active all day. I saw him chasing one pass completion play 11 yards downfield.

Williams? Look, he's a big name. But something is simply not showing up there and I don't know if it's 100 percent lack of effort -- some of it has been lack of effort -- or he's simply lost some of his game due to age or whatever.

Afterward, Wake was asked if he was happy to be back to his "regular role."

“Regular is a relative term, I guess," he said. "I’m ready for whatever situation calls for my services. If it’s the way it was before, if it’s the way it was today. I know that the situation of the game or the plan for the week can change. That’s just the nature of this game. When my number is called, I’m going to go in there and do everything I can to help the team. I’ve been comfortable with that since the day I stepped on the field."

Wake is a good soldier. He'll never be a rock-the-boat guy. So if coaches tell him it's a great idea to use him exclusively as a pass-rusher to save him for later in the season or later in his career, he'll nod his head in agreement. If the coaches tell him they need him to play 75 percent of the plays because he's the best they got, he'll nod his head in agreement and go with that.

I'm glad to see the coaching staff realized saving Cam Wake for the future is good in theory but flawed in practice. The NFL is a right now league. Worry about December in December. Worry about 2017 in 2017. There are games to be played now.

In making the change Vance Joseph stepped up. He did what great coaches do when stuff ain't working. He adjusted. He didn't stop looking for a solution. He found the answer for at least this one game.

Joseph also found a way to pull Maxwell out of his doldrums. Think of this: Last week, Maxwell seemed to be disinterested. He hasn't shown himself a willing tackler since the Seattle game.

But on Sunday, something happened, and that was Maxwell jawing with Antonio Brown. Maxwell was all over one of the NFL's best receivers and actually seemed to get in his head. Afterward, Brown, usually jovial and accommodating, was all surly and unhappy.

Brown was asked if he had room to operate (he didn't).

“I don’t know man, you’ve got to ask the guys … ask someone else," he said. "I thought I had some room but I guess not. We lost the game."

But, but, Antonio ... Were you surprised more deep balls weren't called for you?

Maxwell? Last week he declined to speak with multiple reporters after the game even as he sat at his locker by himself. Saying ... nothing.

“It felt great to get this win," he said. "We needed it, boost the morale of the team but it feels good though."

Joseph got something out of Maxwell this week. He overcome the narrative that his players are underperforming and actually benched one that was. Maxwell responded after being something of a zombie the past few weeks. He overcame the idea that he's not interested in playing.

That was the Miami Dolphins Sunday. They overcame in so many areas.

Here is the complete playtime document from the NFL: 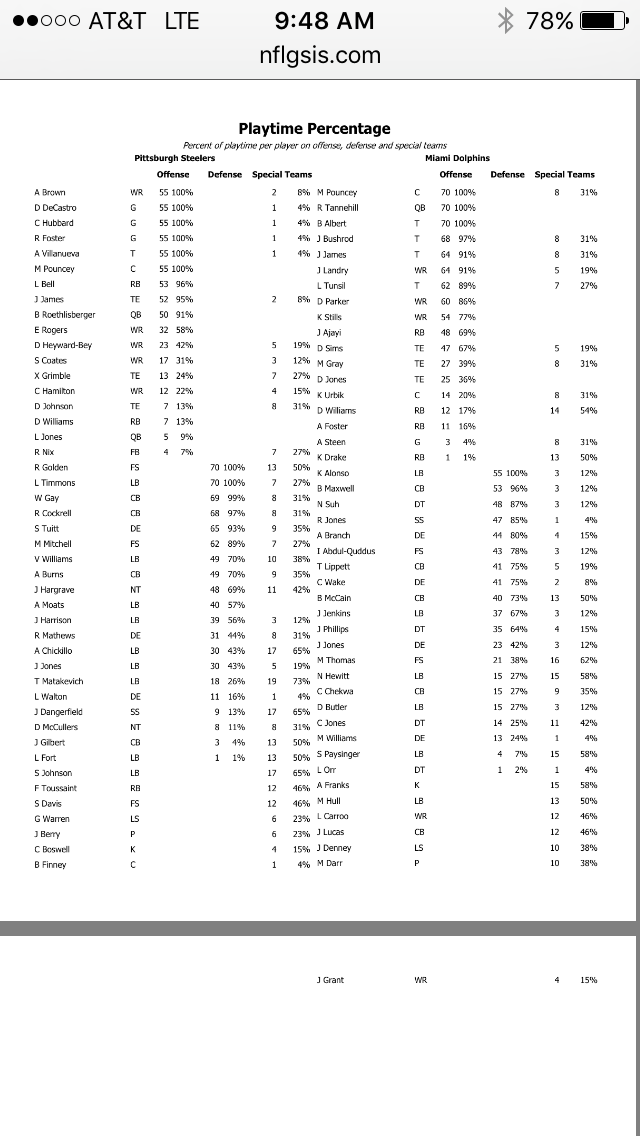