Miami Dolphins players reported to the team Thursday. They got poked and prodded by the medical staff. They got their locker stalls, their hotel rooms and their playbooks -- like the one pictured belonging to running back Kory Sheets which he posted on his twitter page. 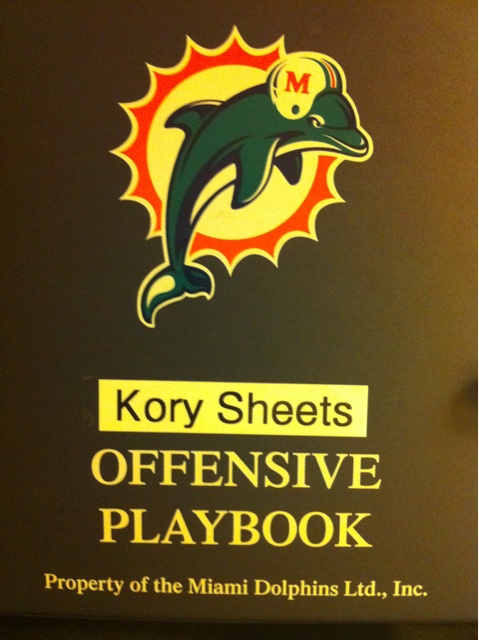 Today, the players hit the field for the first time this training camp with a 2 p.m. practice. The event is open to the public if you are in South Florida and the price is as good as it gets: FREE!

One player who will not be on the field is defensive end Phillip Merling. We learned last week Merling wrecked an Achilles' tendon while jogging on his own. So today he will either go on the injured reserve list or the non-football injury list.

Either way, he's done for the season. But if the Dolphins elect to place him on the non-football injury list it will uncover their intention not to pay Merling his $600,000 salary because the injury did not occur on their watch, in their facility, or during any team sponsored workout or event.

The fact is some players have wondered privately where Merling spent part of the offseason because he definitely wasn't at the training facility often enough for them to see him.

The possibility Merling wouldn't get paid his scheduled salary this year was first speculated by profootballtalk.com. The Dolphins expect to work out an agreement with Merling and his agent Jimmy Sexton that will still keep the player comfortable financially but not to the extent he would have been if he was, you know, actually contributing this year.

In today's paper, I wrote my column about how the Dolphins are a playoff-caliber team in many people's eyes (including my own). But they are practically overrun with question marks. So the Dolphins have tons of question but also tons of hope.

Anway, the piece tells you what some of those myriad questions are and gives you some of the answers, which bring hope for a fine season ahead. So please check it out.

Follow me on twitter. I'll be sharing the action from camp with you there. And check back here throughout the day for a more expanded view of the news, with analysis, opinion, and as always, your comments about donkeys and other things you people come up with.

Posted by Armando Salguero at 12:01 AM in Phillip Merling | Permalink | Comments