Tonight at 7 at Barry University's Pelican Theatre, six playwrights will gather to make random picks that will wind up ruling the next 24 (well, 27 or 28, to be honest) hours of their lives. 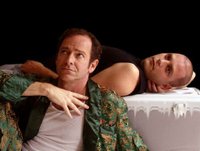 Michael McKeever, Juan C. Sanchez, Ricky J. Martinez, Marco Ramirez, Andie Arthur and Will Cabrera will be the first to feel the creative rush -- and stress -- of the 24-Hour Theatre Project, a fundraiser that will benefit Miami's Mad Cat Theatre Company, Miami's Ground Up & Rising, Davie's Promethean Theatre and Miami's Naked Stage, which is producing the whole shebang. (That's McKeever at right with actor David Perez-Ribada, who might or might not wind up in McKeever's play on Monday.)

First  the six pick a title out of a hat.  Only Antonio Amadeo, Naked Stage's artistic director, knows what's on each little slip of paper, because he made the titles up.  He hasn't even told his wife and fellow Naked Stager, Katherine Amadeo.  He swears.

Then the playwright's pick a director's name out of another hat.  Then, cycling through turns, they pick the names of 24 actors until everyone is assigned to a still-to-be written play.  The writers go away, create through the night, then show up Monday morning at 7 a.m. (!) at GableStage, where everyone will rehearse, memorize, block and drink many caffeine-infused beverages throughout the day.  The audience arrives a little before 8 that night to see what everyone has come up with.

But because process, in this case, is at least half the fun, I'm going to go watch. I'll be at the Pelican tonight, then in various rehearsal rooms throughtout the day Monday. I'll watch the creative sparks, the meltdowns, how each short play comes together. And I'll be blogging throughout the adventure, starting late tonight.  Watch this space, and I'll fill you in.