So the clock is officially running on South Florida's first 24-Hour Theatre Project, a plays-on-the-fly experience that will benefit The Naked Stage, Ground Up & Rising, The Promethean Theatre and Mad Cat, four small companies that happen to involve some of the region's best theater talent.

And though even the six playwrights who are now home and writing furiously can't predict exactly how this is all going to turn out, I'm guessing that Monday's one and only audience at GableStage is in for some crazy/moving/funny entertainment. 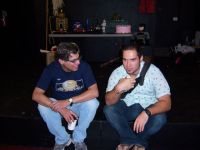 As planned, the six playwrights -- Michael McKeever, Ricky J. Martinez, Andie Arthur, Will Cabrera, Marco Ramirez and Juan C. Sanchez (that's Sanchez at left on the stage looking happy [he's actually a sitting bundle of nerves], Ramirez to his right, already writing his play in his head) -- hit the stage at Barry University's Pelican Theatre a wee bit after 7 p.m. Sunday to find out who would be directing the play they're writing at this very moment, which four actors would be in it, and what the title would be.  In random order, the writers first picked a director's name out of a black cowboy hat, then took turns drawing actors' names(one each time) until all had a cast of four.  Then the writers, directors and the actors who decided to show up despite the fact that they have to arrive at GableStage for a frenetic day of rehearsal at the ungodly hour of 7:30 a.m. huddled to kick around ideas, potential plots, characters -- all the stuff that even a short play needs.

Here's how fate took a hand.

McKeever is writing a play titled How My Sister, Sally Collected Her Winnings Despite the Dead Mime in Her Car in Broward County. Technically speaking, McKeever has already cheated: He actually picked two titles from the list of 28 that Naked Stage artistic director Antonio Amadeo (his company is producing the 24-Hour Theatre Project) came up with.  Broward County was supposed to be a stand-alone title, but McKeever, Mad Cat's Paul Tei (his director) and cast members Todd Allen Durkin, Tracey Barrow, Mathew Chapman and Reiss Gaspard just decided to conjoin the two.  Amadeo and pretty much everyone else at the Pelican displayed a what-the-hell attitude about the project's loose rules, though, so no one seemed to care.

Ramirez and his director, Andy Quiroga, are working on a play titled Twenty Six.  It's to feature David Perez-Ribada, Scott Genn, Deborah L. Sherman and -- tada! -- GableStage artistic director Joseph Adler in a rare acting appearance.  Now, at least half the talent at the Pelican has worked with Adler, who donated GableStage's space for Monday's benefit.  Most love him, though nobody says being directed by Adler is easy.  In fact, Sherman said in advance she hoped she wouldn't get cast in the same play because she might have to kill him.  So karma, naturally, arranged for exactly that thing (the casting, not the killing) to happen.  Should be interesting.  Many Adler stories, most unprintable even in the blogosphere, were floating around the Pelican Sunday night; at one point, Tei, Durkin and Ken Clement were doing dueling Joe impressions, all pretty good. When Sanchez pulled the names Lela Elam and Kameshia Duncan out of the hat, he joked that he'd just write In the Continuum, Part Two.  While the Barry kickoff was taking place, Elam and Duncan were in fact giving their final performance in In the Continuum at GableStage.  Sanchez will actually write a play called Less Than Beautiful, which will also feature Katherine Amadeo and Michael John Carroll, under Stuart Meltzer's direction.  (That's Meltzer on the left in the photo, sitting with McKeever, before the drawing and McKeever's wanton cheating.  A certain Drama Queen is sitting behind them.)

Cabrera, working with director Deborah Mello and actors Ceci Fernandez, Adam Simpson, George Schiavone and John Manzelli, chose one of the nuttier titles:  I Was the Only Lemming on Noah's Ark (spelled Arc on the title list, but we're guessing it's the ship and not Noah's curved line).

Arthur, whose play will be directed by Meredith Lasher (another example of fate taking a hand, since the two women work together as executive director and president, respectively, of the Theatre League of South Florida), got Arnaldo Carmouze, Carlos Alayeto, Michaela Cronan and Erik Fabregat for her cast.  Her title:  Dinner at the End of the World.

And finally, Martinez got director Kim St. Leon and a very interesting cast:  Lisa Morgan and Ken Clement, both Carbonell Award winners who have been directed by St. Leon in productions at Fort Lauderdale's Inside Out Theatre; Stacy Schwartz, a musical theater powerhouse; and Bechir Sylvain, a versatile young actor who will be back at GableStage next weekend in Ground Up & Rising's production of Jesus Hopped the 'A' Train.  After much debate, Martinez and company settled on Dime-Store Novel as their title, and began spinning a noirish plot.  When Martinez went up to the communal props table to pick items that might be used in Dime-Store Novel, he came away with a hookah and joked, "This and Red Bull will get me through the night."

After beer, pizza and bawdiness at Barry on Sunday, the real fun begins not long after dawn breaks in Coral Gables.  That's when the directors and actors will go from first rehearsal to opening night in just about 12 hours.  I'll be blogging throughout, so check back for a blow-by-blow on the controlled chaos.