Every one of the six playwrights involved in tonight's 24-Hour Theatre Project did his or her thing overnight, arriving at GableStage at 7:30 a.m. (the horror!) or so with finished scripts for a 10-to-20-minute play.

Marco Ramirez, who's an award-winning short play writer (he got the Heideman Award during the big-deal Humana Festival last spring, a buzz-inducing thing in the world of play writing), actually wrote two plays by this morning. (Way to make the other playwrights feel inadequate, Marco.)  One uses the title he originally chose, Twenty-Six, and stars Deborah L. Sherman and David Perez-Ribada (as her brother, who happens to be a giant).  The other, Strike, stars GableStage artistic director Joseph Adler and actor Scott Genn as a pair of Storm Troopers from Star Wars.  Everybody says that Adler, who donated his theater space for this creatively-driven fund raiser (benefiting Mad Cat, Promethean, Ground Up & Rising and The Naked Stage, which is producing the whole shebang) is very funny. We shall see. 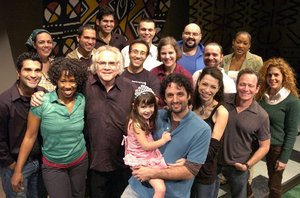 For people who are compressing the entire theater process into just over a day, the actors, directors and bleary-eyed playwrights (most pictured at left, in a photo taken by the Herald's Marice Cohn Band, well before the madness ensued) remained a jovial lot throughout Monday morning.  (Note: The extremely adorable Lara Amadeo, being held by her dad Antonio [the energetic, excited, exhausted Naked Stage artistic director], is not in tonight's show.)

Cycling from Biltmore Hotel banquet rooms to hallways into the GableStage theater, the seven casts rehearsed, blocked, rehearsed, memorized and rehearsed some more -- all by noon.  Tech rehearsal for the bare-bones productions is at 4:30 this afternoon; in between, there's lunch, memorization, maybe more runthroughs.  Oh, and director Paul Tei and actor Ken Clement dashed over to Miami Beach for a callback on a Gatorade commercial, because while donating their services to the 24-Hour Theatre Project is a good thing and a blast, a commercial is a paying gig.

Most of the playwrights went with funny.  So maybe that's why, despite the time crunch inherent in this razzle-dazzle way of making theater, everyone seems to be having a good time.  Rehearsing Ricky J. Martinez's deliberately pulpy Dime-Store Novel, Clement boldly bellows, "Yeah, we're ready for tech!"  Lisa Morgan adds, "I'm ready for opening night. Oh. It is opening night."

Director Stuart Meltzer, who actually could have slept through the night, mentions that his partner, playwright Michael McKeever, woke him up several times to read new parts of How My Sister Sally Collected Her Winnings Despite the Dead Mime in Her Car, or Broward County.  And Meltzer isn't even directing that play.

Who knows how these plays will look tonight at 8 at GableStage?  That there will be glitches, forgotten lines, dropped cues is inevitable.  But so far, the 24-Hour Theatre Project is fostering an exhilarating sense of creative engagement, the likes of which South Florida's theater community hasn't seen.  And in that way, a big benefit for four little companies has already paid off.