Emotion and mystery at the Carbonells

The 32nd annual Carbonell Awards ceremony is history, so it's time for some morning-after -- well, afternoon-after -- reflections.  Full disclosure:  As the Miami Herald's theater critic, I participate in the process of suggesting whether shows I review may have Carbonell-worthy elements.  If enough of those on the opening-weekend panel agree, then the Carbonell judges have to see the recommended show, which might be anywhere from Coral Gables to Jupiter (the northern Palm Beach County town, not the planet).  I'm not a judge, so I don't vote on Carbonell nominations or on who should win the awards.  Which is a long way of saying that the nominees, winners and omissions came as a surprise to me. And not always a pleasant one, in the case of the omissions. 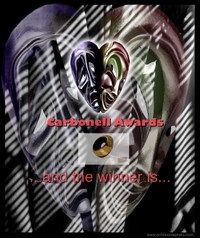 I don't mean to diss any of last night's winners, a thoroughly deserving bunch of artists.  I was so happy to present (along with Joy Abbott, widow of the late and very great George Abbott) the best actress in a play award to a thrilled and trembling Lela Elam for her work in GableStage's In the Continuum. Elam is working at theaters all over South Florida, and the growth of her craft from role to role is abundantly clear.

I was also glad to hand the Carbonell for best actor in a play to Paul Tei for his intense work in Mosaic Theatre's Talk Radio.  Tei and the Carbonell committee are currently at odds over its lack of appreciation for several shows at Mad Cat Theatre Company, the daring small Miami theater he serves as artistic director.  So it was great (not that it solves anything vis a vis Mad Cat) that Tei got that award, the best supporting actor in a play honor (for Glengarry Glen Ross at Mosaic) and shared in the best ensemble award for that show.  Yes, Tei -- who sported a splotch of pink and yellow in his spiked hair, and who seemed to have fueled his smiling rants with an adult beverage or two -- really is that talented. 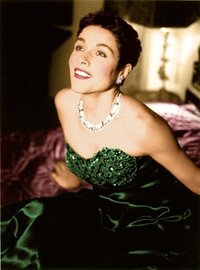 Produced by Dan Barnett, the awards show itself was a bit more low key but classier and more efficient than in some years past.  Lots of that class was exuded by the mistress of ceremonies, Broadway star Christine Andreas (that's Christine at right), who was as relaxed and warm in her patter as she was inspired in her exquisite, soaring singing (you haven't really heard On a Clear Day until you've savored Andreas' version).  Gina Kreiezmar trotted out her dead-on Forbidden Broadway Liza Minnelli, and it was probably better than having the real Liza at the Carbonells. Certainly funnier.

Still, on a night full of emotion as South Florida's theater community paid tribute to Carbonell co-founder Jack Zink, the Sun-Sentinel's long-time theater-music critic and the first two-time winner of the George Abbott Award for Outstanding Achievement in the Arts, I couldn't help noticing what was missing.

There were too many empty seats, for one thing. This is South Florida theater's most special night, a time for the community to come together to celebrate the region's growth and artistry.  Yet some companies -- including the standard-setting Florida Stage, which has also fallen victim to the Carbonells' recommendation system this season -- didn't bother to show up at all.  It's understandable that companies with few nominations would be less than thrilled about buying tickets to cheer on their "rivals."  Understandable but, given the way that artists in South Florida tend to work at many theaters, a little tacky.

Winners of three special awards -- New Theatre founder Rafael de Acha, Caldwell Theatre Company artistic director Michael Hall  and Meredith Lasher of the Theatre League of South Florida -- appeared to get a round of applause but weren't given the opportunity to say anything.  That was a mistake, apparently, on the production side.  Stuff does happen even during the most thoroughly rehearsed live show (which this one wasn't). But it came off as awkward and understandably upset the honorees.

One last complaint, and again, it isn't meant to diminish the achievements of any of last night's winners.  If the Carbonell judges are to be believed, only six South Florida theaters -- Actors' Playhouse, GableStage, New Theatre, the Maltz Jupiter Theatre, New Vista Theatre and Mosaic Theatre -- produced award-worthy work in 2007.

I beg to differ.