A frenetic summer theater season begins this weekend with a pair of festivals: City Theatre's popular Summer Shorts Festival at the Carnival Studio Theater in Miami's Arsht Center for the Performing Arts, and the Lavender Footlights Festival (honoring Tony Award-nominated playwright Douglas Carter Beane) at the Miami Museum of Science. 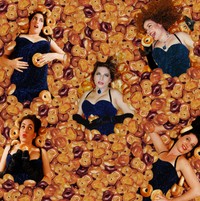 Nice Jewish Girls Gone Bad (those are the girls, in a sea of bagels, at left) is an out-there, stereotype-bashing comedy cabaret piece happening Saturday at the Alfred I. DuPont Building, 169 E. Flagler St., Miami.  The women, including creator Susannah Perlman (who serves as ringmaster/emcee), start their 21st century vaudeville at 9 p.m.  Tickets are $18, available through www.brownpapertickets.com or by calling 1-800-838-3006. Email The Open Tent for more info.

staged reading at 11:30 a.m. Sunday.   The piece is The Book of Ruth by Argentine playwright (and longtime Miami resident) Mario Diament (that's Mario at right).  Commissioned by New Theatre and premiered there in 2000, Diament's theatrical version of his Polish mother's flight to Argentina at the start of World War II is "...the finest contemporary play I have ever been privileged to stage," de Acha writes.

The reading has a stellar cast:  Sally Levin, Barbara Sloan, Ramon Gonzalez-Cuevas and Larry Jurrist (all of whom appeared in the world premiere), plus Marta Velasco, Margerie Lowe, Jonathan Angress and Jessica Peterson.  It takes place at the Futternick Family Art Gallery at the Dave and Mary Alper Jewish Community Center, 11155 SW 112th Ave., Miami. Those attending can share a light brunch with the cast at 11 a.m., and also take in the art exhibition Waldsee 1944, the work of more than 80 artists who created postcards symbolic of the ones prisoners at Auschwitz were forced to send to their families.   For information, call 305-271-9000, ext. 268, or visit the Alper JCC web site.