Actors' Playhouse, partnering with the Funding Arts Network, has found two winners in its "From Page to Stage" play-writing competition. 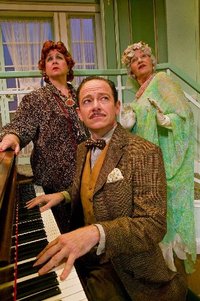 Michael McKeever (that's Michael at the piano in the world premiere of his play Suite Surrender at Boca Raton's Caldwell Theatre Company earlier this season) has written a hard-hitting piece called Unreasonable Doubt.  The play explores a man's vengeance after his daughter's murder -- revenge visited upon the killer's attorney.

Also selected for a staged reading is When the Sun Shone Brighter by Christopher Demos-Brown.  That play centers on a political candidate and the Cuban exile bombing campaign of the 1970s and '80s.

Both plays will get staged readings, directed by Actors' Playhouse artistic director David Arisco, on June 7 -- McKeever's at 3 p.m., Demos-Brown's at 7 p.m.  A panel discussion and audience talkback will follow each reading.

The hope, according to the theater, is that the plays will launch a second stage season of new works.  For information, call 305-444-9293 or visit the theater's website.