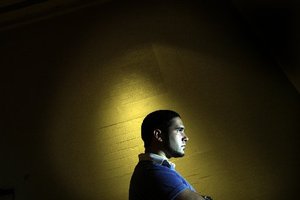 Since he was a student at Coral Reef High School, Marco Ramirez has been a talent worth watching.  He was named a Presidential Scholar in the Arts in 2001; by the following year, he had a play produced in City Theatre's Summer Shorts Festival (Singing Stan), followed by Pipo and Fufo: 1969 in the 2003 festival, I Am Not Batman in 2007, and The Big Brain on Bobby Martin and Becky Meets Mordecai Baxter in this summer's Shorts 4 Kids! festival.

He is a two-time winner of the Latino Playwriting Award at the Kennedy Center's American College Theater Festival for work he did while a student at New York University. And in 2007, he won the prestigious Heideman Award for short plays for I Am Not Batman, which was presented as part of the Humana Festival of New American Plays at Actors Theatre of Louisville.

Now, more good news:  Ramirez learned today that he has been accepted into the play-writing program at Juilliard in Manhattan, a program so competitive that it admits just a few students each year.  One of his teachers will be Pulitzer Prize winner Marsha Norman (she won for 'night, Mother, after beginning her career at Actors Theatre).  But the two will also have a professional connection during the upcoming theater season:  Both will see premieres of their commissioned works during the Kennedy Center's Performances for Young Audiences Season.

After submitting a competitive proposal and being selected for the commission, Ramirez has written a collection of short plays titled Mermaids, Monsters and the World Painted Purple, which the center's press office describes as "imaginative stories that capture the spirit and heart of Latino culture."  His plays debut Oct. 11-26.   Norman has collaborated on a new musical, The Trumpet of the Swan (based on the E.B. White book), with another Tony Award-winner, composer Jason Robert Brown.  Their show runs Dec. 4-6.

Ramirez says he's going to keep his ties with City Theatre, where he's literary manager, and with Miami's Mad Cat Theatre, which premiered his play The Beast.  But it is clear that, for a talented young writer, this is just the beginning.