The fallout from last Sunday's Tony Awards is beginning, as struggling shows that voters shunned are starting to announce closing dates. 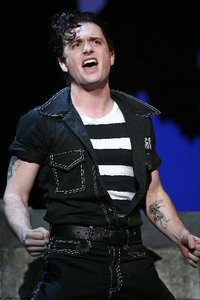 Shed a tear for Cry-Baby, the John Waters movie-turned-musical that hoped to follow Hairspray to Broadway triumph.  Some critics liked it; more didn't. For the week that ended with the Tony Awards, the show sold only $276,245 worth of tickets at the huge Marquis Theatre.  Not not nearly good enough, considering that the scathingly reviewed The Little Mermaid is selling more than $1 million worth of tickets each week.  Kid power.

So Cry-Baby will say see-ya as of Sunday, after 48 previews and 68 regular performances.  But that may not be all for the show that counts ex-South Floridian Adam Epstein among its lead producers.  A national tour is expected to begin in the fall of 2009.  That news may not quicken the hearts of subscribers around the country, but it should soothe its creators' bruised egos a little.

Also playing its last Broadway performances is the smaller-scale A Catered Affair.  The Harvey Fierstein-John Bucchino musical will close July 27, after 27 previews and 116 performances.  But here's betting it will wind up in South Florida, whether on tour or as a local production.

So there can be life after Broadway -- and after Tony snubs.