« A young playwright soars | Main | A fast festival gets bigger » 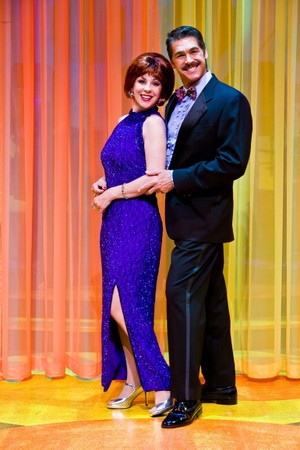 Heads up, Actors Equity. You know this already, but in addition to crinkling candy wrappers, ringing cell phones and audience members who chatter away as though they were in their living rooms instead of a theater, there's another 21st century menace lurking in a sea of otherwise rapt faces:  phones that shoot video.

Last night I went to the Caldwell Theatre Company in Boca Raton to see Pete 'n' Keely, a musical about a '60s Steve Lawrence-Eydie Gorme kind of couple reuniting for a television special.  Not long after stars Connie SaLoutos and Alberto Stevans had begun singing, the young lady in front of me aimed her phone at the stage, captured several minutes of video, then sent it to her friend.  She then spent the rest of the first act trading text messages before departing at intermission. Whew.

I decided to move back in the theater, because a couple of kids seated beside me had been chattering through much of the first act (though the family members with them did nothing to shush them).  Then I noticed two people capturing video -- both with the chatty kids' group. An usher stopped a teenaged boy, who cooled it until the guy walked out, then resumed shooting.  The other man looked to be old enough to be the kid's grandfather.

Is this selfishness? An ignorance of Actors Equity rules against taking photographs and video? A lack of experience with theater etiquette?  Probably all of those things.

I would never argue that Pete 'n' Keely, despite the best efforts of the Caldwell crew and an especially fine performance by SaLoutos, demands the same kind of reverential attention we bring with us into a church or synagogue.  But the show represents the work of dedicated professionals who are trying to entertain the several hundred people who paid for the experience.  A video souvenir doesn't come with the ticket price.