A Mamet is coming back, sans Madonna

David Mamet's Speed-the-Plow, in which the men behaving badly happen to be Hollywood types, is headed back to Broadway in October. 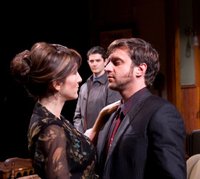 When the play was done on the Great White Way a decade ago, all the buzz was about the woman playing the relatively minor yet influential role of a producer's secretary:  Madonna, who was making her Broadway debut.  Always, there were crowds outside the stage door, Material Girl fans hoping to catch a glimpse of the slender star as she dashed from her car into the theater.  Joe Mantegna and Ron Silver were in the play too, but Madonna's was the name selling tickets.

That part in the upcoming revival hasn't been cast yet, but the other two roles have.  Miami's own Raul Esparza (above, with Eve Best in "The Homecoming" on Broadway) will play Charlie Fox, a guy pitching a blockbuster movie (Esparza is also back working on TV's Pushing Daisies and next year will be seen in the Wes Craven movie 25/8).  Jeremy Piven (left), one of the stars of HBO's Entourage, will be Bobby Gould, the producer unduly influenced by his sexy secretary.

And though Madonna is 10 years older now, she seems to like being around younger guys.  And like being in New York.  So...you never know.