A great actor is gone

There aren't many song-and-dance men anymore. Certainly not ones who can act pretty much anything, dance like a dream, make you laugh, and sing in a way that will move you to cheers or tears.  Not to mention earning two Tony Award nominations.

There aren't many like that, but Bruce Adler was.  Yesterday, word got out that Adler was in hospice care, coping with the final stages of cancer he had fought for a couple of years.  Sadly, he passed away Friday morning around 8:15. 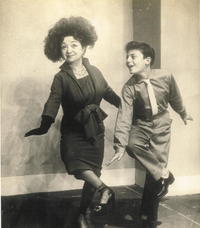 Adler, the son of Yiddish theater greats Henrietta Jacobson and Julius Adler, joined the family business as a kid. Here he is (dancing in the photo at right) with Molly Picon in The Kosher Widow at New York's Phyliss Andersen 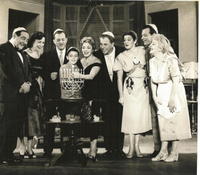 Theater in 1959.  In this group photo, he is celebrating his Bar Mitzvah -- between the matinee and evening performances of It's a Funny World at New York's National Theater in 1957, no less -- with his proud parents (at right in the photo) looking on .  You can see a wonderful array of photos from his long, varied career on his website.

The first time I saw Adler perform was in the 1992 Broadway production of Crazy for You.  He played Follies impresario Bela Zangler, earning his second Tony nomination. I thought he was great then, and I never changed my mind whenever I was lucky enough to see him since. 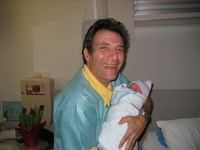 Adler's personal life took an unexpected turn when he reconnected with South Florida-based director Amy London, whom he had known for years since both were active in Actors' Equity in New York.  The two married in December 2003, and Adler became stepdad to London's kids with actor Barry J. Tarallo, a supportive friend to both Adler and his ex.  Then, on Valentine's Day 2007, came the most unexpected turn of all: the birth of Jacob Hayden Adler, the baby who made Adler a first-time dad at 62.

A tribute/benefit featuring many of the stars who have worked with Adler is in the works, though details are still being worked out; a private funeral service for family and friends will take place Monday afternoon. In the meantime, send good thoughts to Amy and the kids, and remember a great entertainer and devoted family man in your prayers.