This play provokes, no doubt

Though touring Broadway shows seem to return like the buzzards to Miami's courthouse roof (even Wicked can get old the fourth time around), it's rare for a regional theater to bring back a hit -- even more rare, with the same cast. 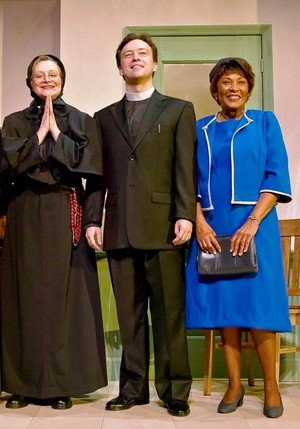 Featuring (as shown in photo, left to right) Pat Nesbit as Sister Aloysius Beauvier, Terry Hardcastle as Father Brendan Flynn, Pat Bowie as Mrs. Muller and (not shown) Amy Montminy as Sister James, the drama pits the suspicious older nun against the charismatic younger priest in a cliff-hanger with no real answers.