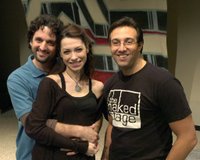 If you had tickets to Naked Stage's 24-Hour Theatre Project, which was to have happened Monday at Actors' Playhouse, you know the event was cancelled.  Producers Antonio Amadeo, Katherine Amadeo and John Manzelli delayed their popular fundraiser due to the death of Jack Zink, the longtime South Florida Sun-Sentinel theater critic.  A Monday afternoon memorial conflicted with what would have been the frenzied rehearsals for Naked Stage's event, and the company felt that many of the actors, directors and playwrights involved would want to gather at the Parker Playhouse to reminisce about the man who had told their stories for more than three decades.

What you may not know, however, is that the delay of its pre-season benefit (whose proceeds were to have been shared with several other small companies) means that the Naked Stage has had to scrub its opening production. Macbeth was to have run Nov. 6-Dec. 7 in the Pelican Theatre at Barry University; now, it will happen...sometime, after the Naked Stagers can raise some money.  Which makes the cancellation of the 24-Hour Project, for me, all the more touching.