« Britain-bound, with help from her friends | Main | Honoring a musical master »

Seated in a wheelchair, an actor inspires

Art Metrano is a funny, funny man.  If you saw him perform Metrano's Accidental Comedy at the Coconut Grove Playhouse in 2001-- or as Lt. Mauser in the Police Academy movies, or as the goofy "Amazing Metrano" on the Johnny Carson-era Tonight Show -- you already know that Metrano knows his way around a joke. 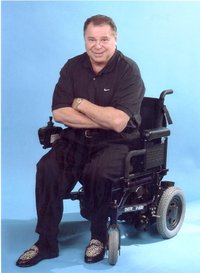 But as a performer-playwright, Metrano can also make you cry.  He stirs both laughter and tears in his retitled Art Metrano's Jews Don't Belong on Ladders...An Accidental Comedy, a play in which he tells the story of just why he has spent most of his waking hours over the past 19 years in a wheelchair.

In conjunction with the Kennedy Center's Leadership Exchange in Arts and Disability Conference now at the Broward Center for the Performing Arts, Metrano is performing his show at the Amaturo Theater tonight through Sunday.  Performances are 8 p.m. tonight-Saturday, 2 p.m. Saturday-Sunday.  Tickets are $25 and $35.  Tonight's opening performance will also be signed, close-captioned and performed with audio description.