Savoring a classic for free 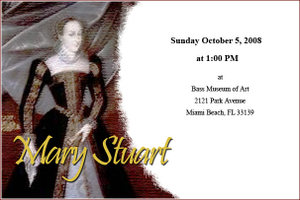 Rafael de Acha's Theater by the Book is getting the jump on Broadway -- at least, on a spring Broadway production -- with a reading of Friedrich Schiller's Mary Stuart on Sunday, Oct. 5.

DeAcha has cast Annemaria Rajala, Harriet Oser, Jana Tift, Wayne Robinson, Carlos Orizondo, James L. Randolph Jr. and himself in the reading of Schiller's play about the rivalry between Mary, Queen of Scots and Queen Elizabeth I.

The drama happens at 1 p.m. at the Bass Museum, 2121 Park Ave., Miami Beach, and admission is free.  For more information, visit the Theater by the Book web site.