Smoke gets in your eyes. Mine too. 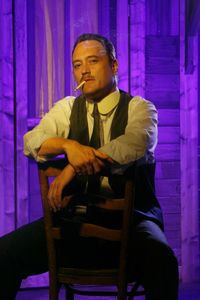 Maybe you've seen them as you're getting ready to walk into a theater:  the signs that let you know there will be smoking or gun shots or strobe lights used in the play you're about to see.

I'm glad to know those things in advance, I guess, but that early warning system usually makes me cringe.  The rapid flickering of a strobe light makes me squeeze my eyes shut 'til it's over.  When I see an actor pull out a gun, I stick my fingers in my ears until the bullets have flown.  And the smoking?  If I could hold my breath for the duration, I would.

I know, sometimes smoking onstage is meant to reveal something about a character. Neil LaBute wrote it into Wrecks, so when Gordon McConnell did the play at Mosaic Theatre last season, he had to smoke up a storm.  It looks like Todd Allen Durkin (pictured in the upcoming Moon for the Misbegotten at Palm Beach Dramaworks) will be smoking when he plays James Tyrone, and maybe that's right for the man and the era.  Intellectually, I get it.

But emotionally and physically, sitting in an audience while an actor clouds the air that we're all breathing is tougher to take.  For me, it's personal  My parents were both smokers. Heavy smokers.  Long after they managed to quit, they both died -- of lung cancer.  A friend who died recently had also quit years before he passed away.  Lung cancer got him too.

I'm glad that, increasingly, states are affirming that non-smokers have the right to breathe clean air.  I prefer that kind of air when I go to the theater. How about you?