« Theater greats get an ultimate honor | Main | Yes, you can see theater for less » 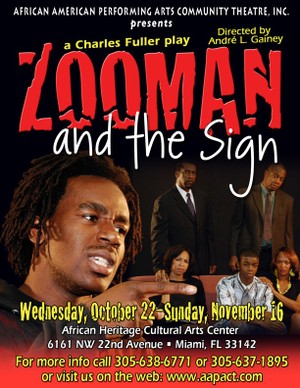 Just two years and three months ago, not so far from the place where the African American Performing Arts Community Theatre (AAPACT) will open its production of Charles Fuller's Zooman and the Sign next week, a little girl died.

Sherdavia Jenkins was nine and sitting on her porch at the Liberty Square Housing Project when she was caught in the gunfire between suspected drug dealers.  After her death, her grieving family was outraged that of the many potential witnesses outside on a hot July day, almost no one came forward.

Fuller's play, written in 1980, powerfully forshadows a tragedy like the one that took Sherdavia's life.  A tough, remorseless Philadelphia kid who goes by the name of Zooman (Derrick Chiverton) accidentally shoots and kills a 12-year-old girl who was sitting on her porch.  Her distraught family tries to get witnesses to tell the truth, eventually posting a sign accusing neighbors of allowing the killers to roam free because of their silence.  The parallels are obvious and chilling.

The disturbing, resonant play is offering two very low-priced previews -- with tickets just $5 -- at 7:30 p.m. Oct. 22-23 at the African Heritage Cultural Arts Center, 6161 NW 22nd Ave., Miami. The performance Oct. 24 will cost $5 for the first 50 people, $10 for everyone else, and it will be followed by a talk-back with director Andre Gainey and actors Carey Hart, Larry Robinson, Teddy Harrell Jr., Curtis Holland, Lamar Swan, Kevin Johnson, Catherine A. Williams, Rachel Finley and Chiverton.